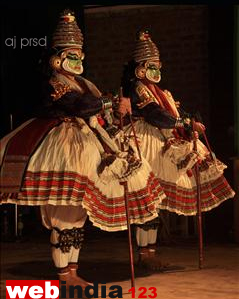 The textual evidence supports the view that numerous regional styles were prevalent in the area, all of which seem to have departed somewhat from the tradition of Bharata. Judging from some of the commentaries on the 'Silappadikaram' and 'Sangitaratnakara', it appears that dramatic forms also had undergone change. These also indicate, that a distinction was maintained between the pure natya forms and the pure dance forms.

The most important texts such as 'Balarama Bharatam' written by Balarama Varma, the ruler of Travancore (1724-98) and the 'Sangita Saramritam' by Tanjore's Maharashtrian ruler, Tulaja, throw no light on Kathakali technique. They deal only with the great variety of dance patterns and the numerous possible permutations and combinations which could be achieved in a given sequence. Only sub-chapter in Balarama Bharatam mentions various knee positions and leg-extensions comparable to some of the movements employed in Kathakali today. The author gave the sanction of the sastras to movements known in the gymnasiums as Kalaris and the movements which are known to the various Kalis. The text which helps us most in this respect is the 'Hastalakshana Dipika', which departs considerably from both the Natyasastra and the Sangitaratnakara traditions.