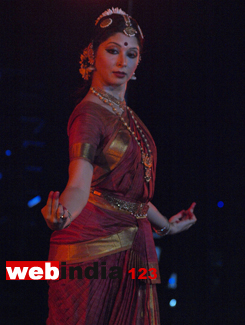 Bharata Natyam was the dance technique evolved in the South of India in Tamil Nadu and practiced in the temples of Shiva. It is a highly specialised science with a traditional background and rigid codes and conventions. Bharata Natyam skillfully embodies the three primary ingredients of dancing. They are bhava or mood, raga or music and melody and tala or timing. The technique of Bharata Natyam consists of 64 principles of coordinated hand, foot, face and body movements which are performed to the accompaniment of dance syllables.

For many centuries Bharata Natyam has been performed only by certain families in the district of Tanjore, these inheritors of the craft being known as 'Nattuvans'. The chief exponents of this dance were the Devadasis or temple dancers. They would perform the dance daily at the time of worship or on festive occasions. It came to be patronized by the Rajas and princes. In course of time Devadasis started dancing in the royal courts and thus its religious sanctity was lost.

Bharata Natyam stands in the forefront of all the classical dance arts now prevalent in India, owing to its religious origin and its highly developed technique. It is the form of dance most akin to the code compiled by the sage Bharata Muni in his famous 'Natya Shastra'. The modern form of Bharata Natyam presentation is the arrangement of four Nattuvans of Pandanallur. They were the brothers- Ponniah, Chinniah, Vadivelu and Sivanandam, who lived in the eighteenth century. The Vidwan, Menaskshi Sunderam Pillay of Pandanallur, the greatest teacher of Bharata Natyam is a direct descendant of the four brothers.

It was Rukmini Devi  Arundale, the celebrated dancer and scholar who took this Dance form out of the temple and gave it a  new respectability. She started a school at Tiruvanmiyur, (the village just outside Madras) named Kalak-Shetra. The age-old, 'Gurukulam' system of education is still followed and many classes are conducted in sylvan surroundings.

In the Nataraja temple-(temple of the dancing Shiva) at Chidambaram, poses of the classical Bharata Natyam are sculpted around the shrines and on the gate ways.