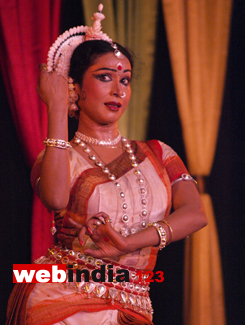 Odissi, the essence of the state of Orissa. Orissa is the highly inspired, impassioned, ecstatic and sensuous form of dance. Odissi was performed in the temples of Orissa as a religious rite and offering by the Devadasis known  as 'Maharis'.  Odissi is a rich and generous cultural gift of the land, well known for its dedication to religion and arts and known in the past as 'Kalinga Desha'. The people of this land raised magnificent temples, each erected as an  act of religious faith and embellished by the skills of master craftsmen, sculptures and architects. These temples became the centre of art and culture and it was here that Odissi, one of  India's

In Odissi, the technique, the style, its stages, the repertoire and the finale were almost amorphous. Today Odissi is a well established and codified classical dance form of India, a dance of love, delight and intense passion, lyrical, pure, divine and human all rolled into one.