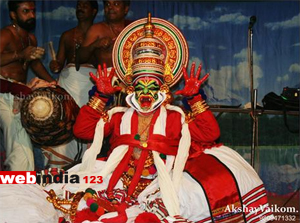 Kathakali is performed in open air on a roughly 5 metre square stage in a temple compound or a courtyard of someone. The stage is generally covered with coarse mats. A tall and massive brass lamp fed with coconut oil is set

This is the only lighting used. The lamp itself as a point of gravitation, assumes a distinct personality of its own with its two flames sometimes prancing and leaping and now flickering. The lamp has two wicks, the thicker one facing the stage and the other one facing the spectators.

The continuous thundering of the drum called Chenda heralds the performance of Kathakali. Chenda is a typical drum which is played on one side only by beating it with two sticks slightly upturned at the ends. It is a percussion instrument with a very loud and piercing sound. There is another drum called Madala which is played on both sides simultaneously with hands. There are also large bronze cymbals. All these three are played in unison to proclaim the performance. This skilled and captivating drumming is known as Melappadam.

Then follows the pure Madala, that is drumming on the Madala alone for sometime. Then there is Mangalacharan and invocation of the gods for blessings and successful completion of the performance. It is followed by the appearance of two men holding a rectangular curtain made up of numerous bright  and deep coloured silken pieces, richly designed and embroidered. Two dancers perform a devotional dance behind the curtain. The dance is of pure type and is called Todayam. The curtain is lowered half way, showing the two dancers who are of noble class. With the louder drumming they perform a captivating dance and the curtain is removed to all accompaniment of sounding a conch shell.

After the todayam comes a pure nritta piece known as the purappadu, in which appear two characters either the hero or his consort or two other pachcha characters or even the five Pandava brothers. The purappadu is another introductory dance of invocation and has no mime. The dancer presents a number of pure dance sequences (Kalasams). The entire technique of Kathakali is exhibited through these cadences. After the purappadu, the play or the particular scene of the play chosen for the evening begins.

Beyond this point the story unfolds through nritta, natya and abhinaya. The passages contain soliloquies of characters or are sometimes highly descriptive to enable the actor to present abhinaya. Sometimes, they consist of key words which can give the dancer full opportunity for presenting variations (sancharibhava) and sometimes, there are passages of court drama and dialogue on which dramatic climax is built up. The passages sung are interspersed with purely percussive musical accompaniment. Thus after a padam has been sung and the abhinaya has been done, the singer stops while the actor goes on to interpret the literary content through gestures to the accompaniment of the percussion instruments. This interpretation is known as the manodharma which affords the actor full scope to improvise. During the manodharma an imaginative and well-trained actor can hold an audience over one sequence for hours. This is followed by pure nritta passages where only the kalasams or the dance cadences are executed.

As the play concludes the curtain is reintroduced and the players behind it make their exit almost exhausted but fully satisfied having played and danced their roles with great confidence, composure, poise, aplomb, virtuosity and eclat.