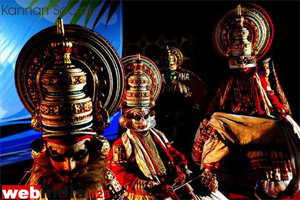 In Kathakali, each actor presents a particular character type rather than being a narrator as in the other solo forms.

There are the demi-Gods or the heroes; they can be generally identified as the dhirodatta heroes of the Sanskrit drama or the sattvika characters of the Mahabharata and the Ramayana. Gods also belong to the category of good characters and Krishna and Rama may be characterized both as gods and as good heroes. These characters are calm, good-humoured, heroic and are seen in their moods of grace and of valour but never in fear or disguist. In their moods of ferocity and anger these basically good types assume what is known in the tradition as raudra rupa, mood of anger. Thus a character like Bhima assumes raudra manifestation when in a state of anger which p rompts him to kill Dussasana.

There are the anti-heroes and the villains, both human and demon. They represent negative forces and are usually aggressive, treacherous and ferocious. These also can be traced back to Puranic stories and their treatment is more akin to characterization in the Mahabharata rather than that in the Sanskrit drama. Kathakali makes a further subdivision of villainous types because villains and demons can be either kings, gods or female demons. They may be simply evil or they may be evil and treacherous and cruel.

Humorous portions of Kathakali are occasionally presented in number in which Hanuman appears. Kathakali tradition also has characters like the half-man half-lion in Narasimha (Prahlada Charitam); half-man half-bird in Hamsa (Nala Charitam) and the monkey deity Hanuman. There are a few other characters who cannot justifiably fall into any of the large categories. These include the ordinary humans such as women, rishis, children, messengers etc. There are the unique persons who live in woods and forests and may be stylized types representing tribal peoples and aborigines.