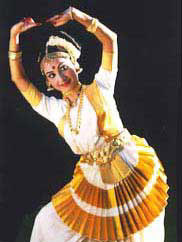 The Devadasi dance tradition which developed through the temple danseuses is an important form among the dance patterns of India. Mohiniyattam in Kerala took shape in the tradition of Devadasi dance which later grew and developed a classical status.

(Teviticci = Tevar + Ati + Acci; Tevar = God, Ati = feet; Acci = woman). Their dance was called 'Teviticci - Attam' (Attam = Dance). This later came to be known as Mohiniyattam by about 16th century AD. The word 'Mohini' literally means a maiden who excites desire or steals the heart of the on looker. It is a solo female dance (in a single costume ) in which the striking features is the musical melody and rhythmical swaying of the dancer from side to side and the smooth and unbroken flow of the body  movement. The dance is focused essentially on feminine moods and emotions.

There is the well known Puranic story of Lord Vishnu taking on the guise of a 'Mohini' to enthrall people both in connection with the churning of the milk-ocean and with the episode of the slaying of Bhasmasura. In the Bhasmasura story, 'Mohini' towards the end of her dance, persuaded the Asura to place his own finger on his head unwittingly to his own undoing. This episode seems to be picturesquely  represented in the first item of the Mohiniyatam  called 'Colkkettu' which begins with a pose of the dancer showing with her right hand, the murder of 'Suchimukha' with her first finger pointing to her own head. So Vaishnava devotees could have given the name of Mohiniyattam to this art form.

'Colkkettu' was also considered  to be a dance pattern sacred to Lord Shiva. There is a sloka in praise of Siva towards the end of the text used for 'colkkettu' in Mohiniyattam.