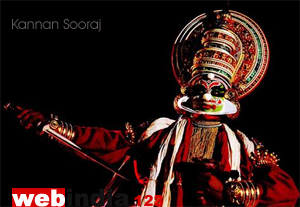 The symbolism which is followed in the make-up and headgears is also carried out in the costume colours worn by the various characters. The Pachcha characters usually wear a jacket of either purple, blue or yellow colour. The red-beards wear a red jacket and the white-beards wear a white jacket. While the scarfs which hang on either side follow the colour patterns set by the make-up. The lower half of the costume of Kathakali dancer is common to all types excepting the minukku characters. An attempt is made to enlarge the actors proportions by using heavily plaited skirts. Beneath this awe-inspiring make-up huge headgear and spectacular costume is a most pliable, lithe, slim and well-trained body.

Most male characters wear dark full-sleeved jackets with coloured or white bulging long skirts. Lengths of white  cloth thrown over the shoulders are also there. The female characters wear their hair in a knot on the top of the forehead veiled with a ornamented scarf falling over red jackets coupled with a white sari covering the lower half of the body.

The ornaments and jewellery include necklace, bracelets, bangles, gilt breast-plates and bunches of tiny bells strung round the ankles. The language of the eyes or the Nayanabhinaya assumes an exceptional role in this style of dance. Hence in Kathakali the expressive qualities of the eyes have been exploited to the maximum and it lends Kathakali a new dimension. Kathakali alone among  various Indian dance-forms uses the different parts of the eyes - the eyebrows, eyelids, the eyeballs, the iris and the pupil to the highest degree of eye expression. In this style of dance recital the eyes of all the characters are reddened by the application of mild irritant of a flower so as to give prominence to the eyes. The bright red eyes suit better to various moods of the characters and the colour schemes of different make-ups. The red eyes together with so brilliant and colourful make-ups head-dresses, gorgeous costumes and jewellery bestow on Kathakali an unearthly and fantastic facet which transform the whole dance-drama into a thing of  another world.