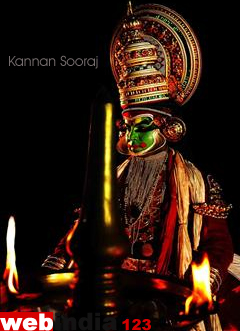 The temple sculpture in Kerala like the frescoes in the Padmanabhaswami and Mattancheri temple provide evidence of the fact that the basic Kathakali positions employed today were established by the sixteenth century. Between the seventeenth and nineteenth century, many momentous changes took place in Kerala. While age-old tribal and rural rituals and customs continued in forests and lush vegetations. There was the sophisticated performance in the temple courtyard or special theatres i.e. Koottambalam. On streets, there was a variety of forms ranging from the humble Ottanthulal martial displays, to the innumerable types of theatrical performances connected with annual festivals. By the early part of the twentieth century, while the ritual dance drama traditions, such as Teyyams, the Bhagavati cult dances continued, temple dancing and the sophisticated rituals especially of Kudiyattam, Kathakali, Krishnattam and Ramanattam seen to have shrunk or at least become fragmented.

It was in 1932 that Poet Vallathol in Kerala began Kerala Kalamandalam which was formally established in 1936. He gathered the great Gurus, Ramamuni Menon, Kunju Kurup and others, reinstilled poetry and literature and gave Kathakali the form in which we recognize it today. Scripts of Kathakali plays written by Unni Warrior and Thampi were employed, a new format was adopted and in so doing, an ancient art had also been given a new sensibility.