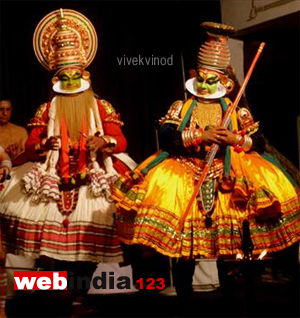 The human body is made up of minute anatomical units which function individually or in combination with other parts. The muscles play an important part in Kathakali and the movements of the facial muscles are a most significant part of a dancer's training. The geometrical pattern which the dancer follows may be described as either a square or a rectangle, with the dancer standing with book feet apart, knees turned out and the outer soles of the feet touching the ground. This position may be identified as the mandala sthana. The dancer covers space also in patterns of square and rectangles. The right foot meets the left and one side of the square. The dancer moves forward to the third corner of the rectangle and then back to the second corner and finally comes back to the first corner but only touching all four points. With his arms and hands, the dancer covers space usually in figures of squares and rectangles or clearly drawn diagonals along these squares and rectangles. Occasionally the hands execute figures of eight and the eyes follow, but the movement sequence always limits imaginary geometric pattern. The knees are always turned out and there is invariably space of two to three feet between the feet. The torso is used as one unit or occasionally, two i.e. the upper and lower torso. Jumps, spirals, sweeps and leaps are characteristic. Leg extensions are clear and the weight must be shifted from one foot to the other in these extensions with ease. It is an essential part of the dancers training to learn how to use each facial muscle separately. The movement of the eyebrows, the eyeballs and the lower eyelids described in Natyasastra are not used to such an extent in any other dance style of India.

In the nritta portions of Kathakali, the dancer executes leg-extensions and jumps still covering space in a series of squares and rectangles to a given time cycle (tala). The units of the nritta portions are the Kalasams. In Kathakali these cadences of dance patterns culminate in compositions known as araddis which are usually multiples of three. Other types of nritta sequences, based on different ways of manipulating the rhythm, are known as the adakams and the tomakarams. The pure nritta technique appears in the repertoire mostly as a prelude to the dance-dramas. The todayam and the purappadu may be described as typical nritta numbers. In both, the dancer begins the movement in the slow tempo of the basic metrical cycle and then to the mnemonics of the mandalam and the chenda, executes the nritta patterns. The hand or arm gestures here are few and usually only variations between the alapadma and the hamsasya.

The Kalasams is the twist fundamental units of a cadence of movement in Kathakali. There are the double Kalasams which normally are longer than the smaller units, sometimes these culminate in multiples of three. There are even bigger Kalasams known as the Baliya Kalasams. These are extended passages of dance but always used in dramatic structure. There are then the Vattam Vachchu Kalasam which represent covering space in circles. There is the largest of the longest type of Kalasams called the asthakalasam. This kinetic phrase is a stringing together of eight different units normally set to a 10 beat metrical cycle called the champa tala. It is important to note that each of these nritta passages are always used as part and parcel of the dramatic spectacle. These Kalasams also have an emotional mood or bhava. Always these are conditioned by the mood of the play and the particular situation of the dramatic scene. These can be introduced, within the dramatic structure in a number of ways. For example, araddis Kalasam are used only as the milder forms of heroism or when a romantic scene is being presented. Baliya Kalasam are used in scenes of combat battle or heroism. The astha kalasams are rendered only at particular moments. These punctuate the singing of the padas and come before or after the abhinaya which is normally done or performed to a sung line by two vocalists, the principal and the supporter.

The abhinaya technique of Kathakali has such variety and flexibility that it allows the dancer actor to treat his theme or his character in many ways apart from the possibility of improvising or taking off on the sung words or dancing the words as in Choliyattam. There is always the possibility of some interpolated passages through  mime. Here the actor has the fullest freedom, he follows no text and he can improvise to his heart's content. This is known as the manodharma of the actor. He must keep to the basic character which he is portraying. He must create that dominant mood whether it is of love or humour, compassion or disgust or tranquility.

Kathakali actor uses the hastas, i.e. the hands and the eyes as his most important instruments of communication never forgetting that these are used along with other micro movements of the face and the micro movements of the lower lower limbs and the torso. The Kathakali tradition of the hastas is different from that of the Natyasastra and the Abhinaya Darpana. The extended hand is called tripataka in the Kathakali tradition. The text followed by the Kathakali actor is the 'Hasta Lakshana Dipika' which described 24 basic hastas of single hands and an equal number of combined hands. Each hasta can be used in its permutation and combination with another hasta. It can be used at different levels, it can be used along with the movements of the arms and the eyes delicately or with energy or without. The Kathakali tradition has enlarged and elaborated the language of gesture.

The abhinaya is presented in three stages:

a) word to word synchronization (b) interpretation of the full line and (c) abhinaya of the dancer following the singer.

There is an aspect of abhinaya in Kathakali where the dancer uses the words of the line only as a starting point and improvises a full sequence of movements. Hand-gestures language is most significant here for the elaboration of the word. This position, known as Choliyattam, is the final test of any great dancer's imaginative faculties. Although the line of poetry may only say that Bhima went through a forest the dancer is at full liberty to present the forest in all its beauty and splendour.

Abhinaya is also seen in its manifestations of the Vyabhichari or the Sancharibhava. Here the main objective of the Kathakali dancer is  to evoke a particular dominant mood (sthayibahva). This he does by presenting variations on the same theme. In the abhinaya portions of Kathakali, the hastas assume prime importance.