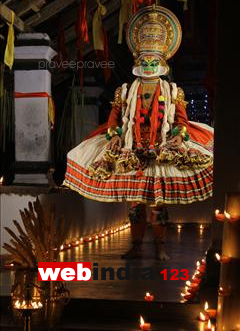 Kathakali, is an efflorescent art form of Kerala. It has been described as a true representation of the artistic traditions of India and one of the most magnificent theatres of the imagination.

Kathakali is a highly stylised dance-drama which serves to present story themes derived from the Ramayana, the Mahabharata and other Hindu epics, myths and legends. The dance aspect consists of pure dance (nritya) as well as mime (abhinaya).

Kathakali was traditionally the preserve of men, but now women also perform the dance. The themes have also changed with times and the latest innovation is Shakespeare's King Lear.

What is most striking about Kathakali, is the emphasis given to aharya abhinaya, the use of costumes, ornaments and facial make-up. According to the qualities that they represent, the characters fall into five main types and the makeup illumines these types.

Kathakali makes strenuous demands on its exponents because it is the only dance form in which the entire body, both skeleton and muscles, down to even the smallest facial muscle are used to portray emotion.

The actor in kathakali never speaks expect with his hands. The text of the drama is sung for him and is the baseline for his interpretation. It is in histrionics or interpretive dancing that the Kathakali artist excels, the spectator's experience enhanced by the thrilling drum beats.