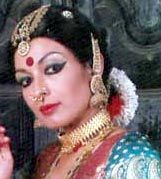 Mallika Sarabhai, one of the leading exponents of Bharatnatyam and Kuchipudi,  is the daughter of the dancing legend Mrinalini Sarabhai and the renowned scientist Vikram Sarabhai. A multifaceted personality, Mallika is not only a dancer, but also a noted film-maker, internationally known choreographer, an actress, a TV anchor, an editor, a publisher and so on. Throughout her different careers dancing has remained her first love.

Mallika started her acting career when she was fifteen and starred in Gujarati and Hindi films. She has also played the role of Draupadi in Peter Brooke's film 'Mahabharata', which was made in English and French. After completing her graduation, Mallika entered into the world of performing arts. She followed the foot steps of her mother and places herself firmly at the cutting edge of Indian dance and dance theatre. Along with her other interests, she took her Masters in Business Administration from the Indian Institute of Management, Ahmedabad and a doctorate in organisational behaviour.

Mallika, along with her mother co-directs the Darpana Academy of Performing arts in Ahmedabad, a unique centre for the arts which has performed all over India and abroad. Today the academy has many faces; the Darpana Performance Group, the Janavak Folk and Tribal Dance Company, Darpana for Development, Darpana Communications, the Darpana Conservatoire etc .

Mallika received her first award in 1977. She was the recipient of the "French Palme D'or", the highest civilian award by the French Government and in Paris she was honoured as the 'Best Soloist Artist' among 400 dancers from 25 countries among other awards.

Personally she is a strong character with her own ideas and she feels that dance is a living language which you can interpret the way you think best. She has learned both the theory and practice of dance and her experiments include compositions like Draupadi, Shakti - The Power of Woman, Sita's Daughters, Itan Kahani, Aspiration, Ganga, Surya etc. Whatever field she is involved in, be it an activist, writer, instigator of community projects, anchorperson of magazines or TV channels, painting with her feet, Mallika is so full of energy that she excels in it.