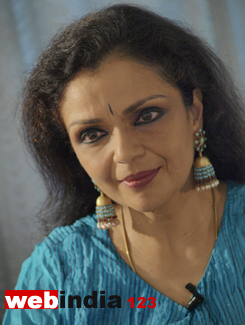 Anita Ratnam, one of the India's most gifted artists is an accomplished classical dancer and choreographer. With a career spanning three decades and over 1000 performances in 15 countries, this multifaceted personality has made significant contributions in other fields as Choreographer, Scholar, Television Personality and Cultural Activist.

She had her initial dance training under Adyar K. Lakshmanan and later went to Rukmini Devi Arundale's 'Kalakshetra' for advanced training and earned a Post graduate diploma in Dance. She trained in Bharatanatyam as well as Kathakali and Mohiniattam, the classical dances of Kerala .

Having done her Master's degree in Theatre and Television from the University of New Orleans, in U.S.A., she spent ten years as a Television Producer/commentator in the United States with productions including a weekly series on art, travel and culture in India and the highly acclaimed 'Festival of India's TV series. Her work there earned her Emmy and Ace award nominations.

Anita is the Founder-Director of 'Arangham', a performing arts organisation, established in Chennai (Madras) in 1992, dedicated to explore, enrich and promote the performing and visual arts of India. Her productions reflect a unique ability to combine and experiment the classical and contemporary, presenting Indian traditions in new versions for modern audiences. Anita has toured abroad widely to perform as well as conduct workshops, choreograph, to present lecture demonstrations and participate in Dance and theatre seminars in places from the Far East to Europe to United States. She has alliances with several Indian as well as International dance and theater companies and has created several unique works such as 'A map to the world' (1997) with native American poet Joy Harjo, ' The inner world' (1998) with Pangea World Theatre in Minneapolis, 'Dust' (2001) with Mark Taylor of Dance Alloy in Pittsburgh, USA; ' Vortext (2002)' with Canadian dance artist Peter Chin,  'Daughters of the Ocean' (1999) with writer Shobita Punja which toured India to much acclaim etc are some of them.

She is also the author of 'Natya Brahman' a book on the comparative drama traditions of India and Greece and is editor and publisher of 'Narthaki' - a directory of Indian dance. A truly multi-dimensional personality, Anita Ratnam has also made an impressive entry into films (with her role as an antagonist in Rajiv Menon's family drama 'Kandukondain Kandukondain'). She was the key person behind the movement which promoted contemporary Indian dance, called the 'The Other Festival' which used to be held in Chennai every December till 2006.

Anita Ratnam has received several awards and recognition for her work in the performing arts in India and abroad. Some of them being the 'Nritya Choodamani'(1996) by Sri Krishna Gana Sabha, Chennai;  'Kalaimamani' (1998) for Dance Research by Govt. of Tamilnadu, Media Achievement award (1991) by National Organisation of women in New York, Mahatma Gandhi Award for cultural harmony (1986) US; 'Lalithakalaratna' (2003) by Sri  Lalithakala Academy Foundation Trust (Inc.), Mysore, 2003, 'Natya Ratna' (2003) by Sri Shanmukhananda Sangeeta Sabha, New Delhi etc

Today, apart from enchanting audiences being a dancer/ choreographer, Anita performs as a cultural commentator, writer and speaker on the performing arts and deserves credit for her role in furthering the profile of Indian dance internationally.