The dancer begins with the movements known as the chali. It is a movement which suggests basic ways of walking and covering space. The dancer moves first to the front and back with hands held horizontally at the chest level and then moves these hands vertically in an up-and-down direction. She then covers space in si 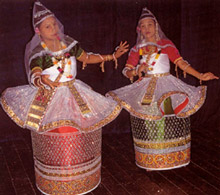 de-ways walking, ending by weaving circles and spirals. In these basic movements, the various types of bhramaris are introduced, the two distinct varieties being the uplai and the longlai. These lais whether in lasya or in tandava as ways of covering floor-space; usually is side ways movement followed by a semi-circle. They are the finale of the dance cadences and are often executed in multiples of three as in the tikai of the other dance styles. Sometimes a spiral movement in vertical space is executed, where the dancer treats her body like a screw and weaves a spiral vertically from a higher level to lower level.While doing so the dancer also takes a circle or a spin. This is very difficult movement has a graceful fluidity, sometimes mistaken for imprecision. The achongha of jumping movements are characteristic of the tandava portions of the dance.

The basic movements of the chali are connected together to form the various types of parengs. The parengs are cadences of movements in a given metrical cycle. The metrical cycles are many and in-beats and the cross-beats are complicated, requiring a high sense of precision. All the lais are used in parengs and different types of talas are employed, especially the rajmela, the seven beats (rupaka), 15 beats (panchamsvari) and the 16 beats (tintala). The first three bhangis and the bhangi pareng achongba, the Vrindavan pareng and the khurumba pareng are known as the lasya cadences. They are used in common rasa portions of the dance. The three other bhangis have a common adjestive gostha which stands for the tandava bhangis. They are used by actors while presenting the character of Krishna in the rasa dances. Three such bhangis are prescribed, namely the gostha bhangi pareng, the gostha Vrindavan pareng and the gostha Khurumba pareng. The last one is rarely performed and seems to have gone out of vogue.

The dance has a highly complex technique of movement and tala. The dance is not restricted to solo numbers. Manipuri is the only classical style in which we find exquisite survivals of compositions, such as the hallisaka, the charchari and other forms mentioned in classical Sanskrit literature. In the rasa dances, we find that all the four types of pindis mentioned by Bharata can be seen.