Kathak can be divided into two main parts, namely nritta and abhinaya on the one hand, and tandava and lasya on the other. The nritta portions are presented in a sequence beginning with the traditional entry, known as the amada. It is commonly believed that the amada was preceded by an invocation to god Ganesa. This was known as the Ganesa Vandana or the Ganesa parana. Through the amada, the dancer makes his entry into the stage and the invocations to the Hindu god Ganesa was changed into the salami or the court salutation. The amada is usually composed in the medium tempo of a metrical cycle of 16 beats (trital). The amada end with a short pirouette movement and then follows Thata. 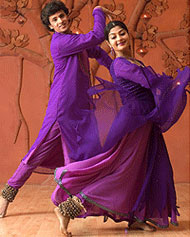 The Thata is the Kathak dancer's way of presenting the different movements of the angas and the upangas. Thata is an initial stance in which the dancer stands with the body firm and upright the right arm bent at elbow and the hand resting on the waist and the left raised a little over. The dancer stands with his feet crossed with the right slightly bent and only the toes touching the ground. There might be some variations in the Thata. The dancer introduces the Kathak with the rhythmic graceful movements of his eyes, eyebrows, neck, chest and shoulders, while the musicians play at a medium tempo in a relaxed mood. It is a sort or warming-up for the full and scintillating dance which is to follow. The hands and forearms are held parallel to the chest and the finger tips of one hand touching those of the other. The hands are then moved outwards and forwards with the feet moving backwards and forwards and in a circle. The dancer makes various feet movements virtually standing at the same spot.

These entry numbers are soon followed by the presentation of pure dance patterns known as the tora, tukra and parana. These are successive rhythmic patterns, named so either according to the varying degree of the complexity of the rhythmic pattern or on account of the mnemonics used. Whether they are of the tabla or of the pakhavaj  (drum). The tukra is perhaps the simplest variety where the mnemonics are of the tabla and it emphasises one particular type of pattern which is usually terse and uncomplicated by quarter beats or two-third beats. Sometimes, people have defined the toras analogues to the toras of the sitar where clusters of sound patterns are presented in a given raga structure. The  distinguishing feature of the tora is its formalized pattern, taking only a few types of mnemonics into consideration.

The tora is followed by the tukra, which is often presented as the chakkardar tukra. These tukras are built in the same manner as the tirmanams of the varnam in Bharatnatyam. The dancer begins with a rhythmic pattern seemingly slow and in Vilambit laya. This is followed by presenting some mnemonics in a different tempo and then presenting them finally in a double or a triple laya. The entire sequence is repeated usually three times or in multiples of three. The structure is thus built on an acute mathematical sense and the dexterity of the artists lies in building up this structure either from the first beat of rhythmic pattern or from any of the subsequent beats, the unalterable principle being that the dancer must end on the  last beat of the metrical cycle or the first beat of the new cycle, but mostly the former.

The parana is the next variety and it has been identified normally as dance pattern executed to the mnemonics of the pakhavaj. In parana the tempo is very fast, the patterns highly intricate and rhythmic and the control of the feet so great that at times, when desired, the hundreds of ankle-bells produce the sound of one seven or twelve only. The friendly but challenging competition between the danseuse and the percussionist at this stage is extremely thrilling and fantastically brilliant .

There are sub-divisions and re-classification of the tukras, toras and the paranas. One such re-classification is the composition which comprises sound of various percussion instruments such as the nagara, pakhavaj, jhang, manjira, duff and tabla. It has a combination of the tandava and the lasya mnemonics. There are tukras which are known as the sangeet ka tukras. These are compositions usually with mnemonics of one syllable or at  best two syllables each, but with some musical quality about them.

The nritta portions of Kathak are presented to a repetitive melodic line known as the nagma. The recurrent line serves the same function as the tonic in a raga. Both the drummer and the dancer weave endless. Very few numbers are known to Kathak which aim at or achieve a svara to svara synchronization of dance movement and musical sound. The synchronization is all in the sphere of the metrical cycle. The tarana may be cited as a single exception. Here the dancer does weave patterns to the accompaniment of svaras of the tarana.