This sub-region comprises Arunachal Pradesh, Assam, Meghalaya, Nagaland, Tripura, Western ghats, West Bengal and Andaman and Nicobar Islands which receive heavy rainfall. These areas are covered with evergreen forests. These forests have  three storeyed vegetation. The upper level consisting of tall and magnetic trees forms the top canopy receiving most of the sunlight. Trees of lesser height form the middle level. They prefer shade and require less height.  The thick, dense and rich environment is capable of providing food and shelter to a host of animals of all kinds-the ground dwellers as well as tree dwellers. In the south- Nilgiris, Annamalai, Palani hills and other south Indian ranges have extensive grass land dotted with patches of dense evergreen forests. These grasslands are known as sholas. They provides shelter to elephants, gaur and other large animals. Himalayan animals such as tahr, pine marten and European Otter, live here. The Vegetation and animals of the region show affinity height with high altitude forests of Assam. 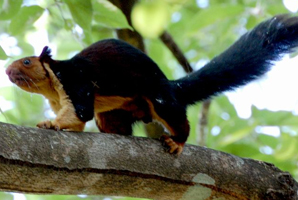 The forests of Andaman and Nicobar islands come under the equatorial belt of tropical rain forests. Due to their separation from the main land, most of the islands are free from human settlement. They carry one of the most beautiful forest in the world. There are about 200 species of trees of which Padauk, Gurjain, silver-gray etc are prominent. Some of the endemic species of the islands are wild pig, norcondum, hornbill, Nicobar-megapode, Andaman teal, Nicobar pigeon, white bellied sea eagle, Andaman Cat snake, Nicobar legless snake etc. There are 16 species of bats and 13 species of rats. Constituting nearly 3/4th of the total numbers of mammals. The representative of ungulates, squirrels, carnivaora and larger mammals are absent. Deer species were introduced in the Island during 1920s. All of them except Sambar have survived civet was also introduced which has multiplied to dangerous proportion. The fauna now found are macaque, palm civet, spotted deer, barking deer, hog deer, dugong etc. The marine life consist of crocodile, turtle, coconut-crabs, water monitor, green lizard and 40 species of snakes including cobra, viper, coral and sea snakes and pythons.

The highest number of tigers are found in mangrove forest which are found in Sunderbans delta formed by the estuaries of Ganga and the Brahmaputra. The animal besides tiger are spotted deer, pigs, rhesus, monkey, lizard, water monitor, crocodile, crabs and fish . The fish-the mud skipper-can climbs trees. Weaver ants found here make their nest in the trees. The tiger here is the most interesting animal which swims in the creeks, preys on fish and crabs besides spotted deer and wild boar. The tigers here have the propensity of killing human beings.