Dengue fever (DF), a benign acute febrile syndrome, has been called the most vital mosquito-transmitted viral disease. It is caused by one of four closely related virus serotypes (DEN-1, DEN-2, DEN-3, and DEN-4), of the genus Flavivirus. Each serotype is antigenically distinct, so there is no cross-protection, and epidemics caused by multiple serotypes (hyperendemicity) can occur. The infectious disease is transmitted to humans by the bite of mosquitoes, most commonly Aedes aegypti. It is possible for a person to have Chikungunya and Dengue fever together at the same time because the infected Aedes mosquito can carry both the viruses. Dengue disease is sometimes called break-bone fever because it causes severe joint and muscle pain that feels like bones are breaking. 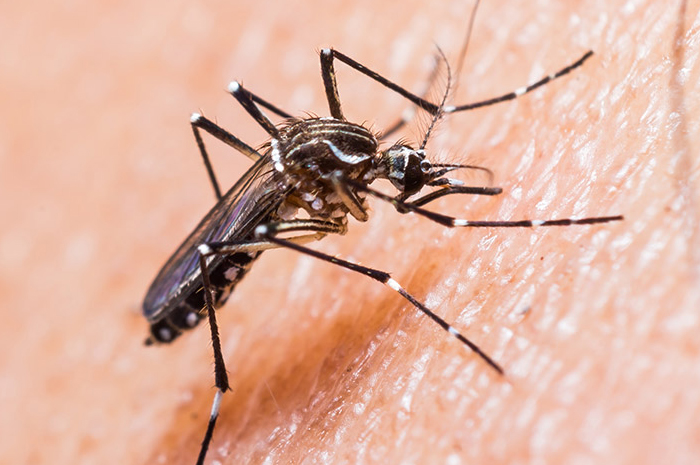 In some cases of Dengue, the virus may cause increased vascular permeability that leads to a bleeding diathesis (unusual susceptibility to bleeding) or disseminated intravascular coagulation (clots) (DIC) known as dengue hemorrhagic fever (DHF). DHF is characterised by hemorrhage and shock called dengue shock syndrome (DSS).

The first outbreak of Dengue fever epidemics occurred in 1779-1780 in Asia, Africa, and North America. Its viral etiology and mode of transmission through mosquitoes were not established until the early 20th century. A pandemic of dengue began in Southeast Asia in 1950s after World War II and has spread around the globe since then. By 1975, this mosquito-borne disease had become a frequent cause of hospitalization and child mortality in several Asian and South American countries.

During the past few decades, outbreak of Dengue fever are causing concern in several South-East Asian countries including India. In India, the dengue virus was first isolated in 1945. Delhi had outbreaks of dengue virus infection due to different dengue virus types in 1967, 1970, 1982 and 1988. During these epidemics no cases of DHF/DSS were reported except some cases in 1988. In 1996, a major outbreak of dengue hemorrhagic fever was reported in Delhi.

Signs & Symptoms
Dengue infection can cause a spectrum of illness ranging from mild, undifferentiated fever often to 104-105 degrees Fahrenheit. There may be severe headache, retro-orbital (behind the eye) pain, joint and muscle pains. A flat, bright red rash may appear first on the lower limbs and the chest and it spreads to cover most of the body early during the fever. A second rash, measles-like in appearance, appears later in the disease. There may also be gastritis with some combination of associated abdominal pain, nausea, vomiting or diarrhea. Infected people may have increased skin sensitivity and are very uncomfortable. Some cases develop much milder symptoms, which can, when no rash is present, be misdiagnosed as a flu or other viral infection. Generally, younger children have a milder illness than older children and adults. The classic Dengue fever lasts for about six to seven days, with a smaller peak of fever at the trailing end of the fever. Dengue fever should not be confused with Dengue hemorrhagic fever (DHF), which is a separate disease and frequently fatal.

The symptoms of the deadly complicated Dengue Haemorrhagic Fever (DHF) includes bleeding from the nose, gums, or under the skin, causing purplish bruises, thrombocytopenia (reduced platelet count) and plasma leakage. In Dengue Shock Syndrome (DSS) all the above signs will appear plus circulatory failure, hypotension for age and low pulse pressure. DHF and DSS are potentially deadly but patients with early diagnosis and appropriate therapy can recover. DHF requires continuous monitoring of vital signs and urine output. DSS is a medical emergency that requires intensive care unit hospitalisation

The increase in dengue mortality is considered to be a reflection of the increase in the proportion of DF patients who develop DHF/DSS.

Treatment
Once a person acquires Dengue, the key to survival is early diagnosis and appropriate treatment. The mainstay of treatment is supportive therapy. Risk factors for dengue hemorrhagic fever include age, immune status, as well as the type of infecting virus. Persons who were previously infected with one or more types of dengue virus, if infected again, are thought to be at greater risk for developing DHF.

There is no specific treatment for dengue. Patients must take rest, drink plenty of fluids and are encouraged to keep up oral intake, especially of oral fluids. If they are unable to maintain oral intake, supplementation with intravenous fluids may be necessary to prevent dehydration and significant hemo-concentration (decrease of the fluid content of the blood, with resulting increase in its concentration). They should be kept away from mosquitoes for the protection of others. Dengue hemorrhagic fever is treated by replacing lost fluids. Some patients need transfusions to control bleeding. .

Prevention
The best way to prevent Dengue fever is to take special precautions to avoid contact with mosquitoes. Using personal protection like mosquito repellents on skin and clothing, wearing long-sleeved shirts and long pants etc will help to prevent mosquito bites. Mosquito abatement programs may reduce the risk of infection, but vaccination is the only sure method of prevention.

Note : All statements given are only for information purpose. We are not responsible or liable for any problems related to the utilization of information on this site. We suggest that you consult a qualified doctor before trying any alternative health care remedies.

X
Information
About Us
Advertise with us
Enquiry
Sitemap