Young Upendra's father' Kagal Padmanabh Bhat, wanted him to become a Sanskrit scholar and be with him in Mangalore. 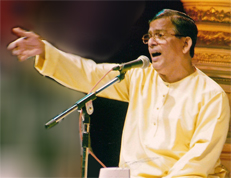 He would not have a mere "singer son." Of course, he could not have his way. Things changed when Upendra sang "Murali daniya moha maya.." in school. And his sining had the stamp of Pt.Joshi. Puttur Madhav Nayak, a music lover, was so impressed by the lad's singing that he put him under the tutelage of Narayan Pai, the best Hindustani teacher around.

It so happened that in 1971, Pt. Upendra Bhat got to accompany Pt. Joshi on the Tanpura. He pleaded to Pt. Joshi to accept him as shishya. Pt. Joshi in turn directed him to his disciple Madhav Gudi. Soon he became the disciple of Pt. Gudi. In 1980, Pt. Joshi accepted him as a student. And Upendra Bhat shifted his base to Pune. Pt. Joshi changed his notions by rejecting all his learning till then. He started teaching  Pt. Bhat  the basics in Bhairavi. He taught him the essence of kharaz ( lessons in lower octave). He showed him how the body should be calm and the mood pleasing.

Many awards came his way. This including the Surmani award. in 1996, the then President of India, S.D. Sharma, honored him. In 2000, he received the Musician of the Year Award from the Andhra Pradesh Association of North America. He won a citation for his contributions to music during the Millennium Konkani Sammelan in Chicago. At 62, he also won the Vadiraja Puraskar recently. He performs at the Savai Ganharva Music Festival at Pune.