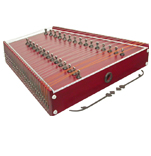 Santoor is a stringed instrument which is popular in the middle East. It is of great importance in Kashmir. Santoor is used there for accompanying a type of classical music called 'Soofiana Kalam', along with other instruments.

Santoor is made of a box of wood, trapezoid in shape. Over this there are thirty bridges, arranged in fifteen rows, two in each row. A set of four strings of metal tuned to the same note is stretched over each pair of bridges, thus the total number of wires is sixty. The length and thickness of strings vary according to the octave, the strings are thickest in the lower octave. It is played with a pair of flat wooden pieces curved at the striking end.