When a pilgrimage destination is located in a scenic natural environment, the experience doubles up to be a great adventure. Like my recent trip to Paonta Sahib with my family. 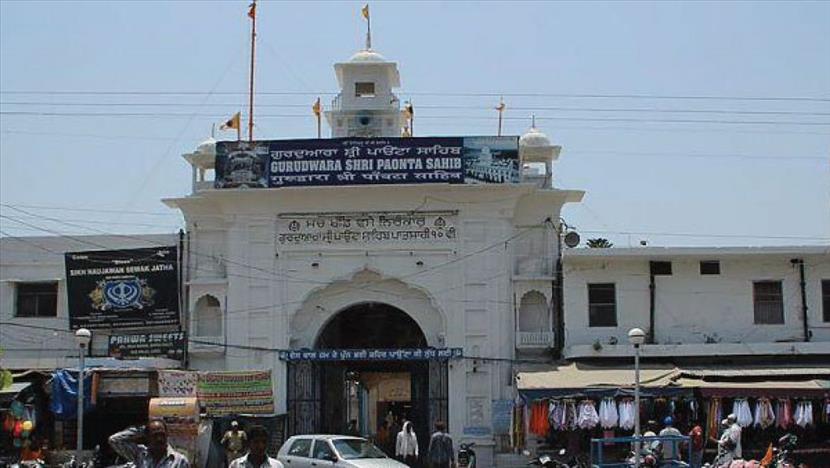 This small but sacred town is snuggled in the tiny district of Sirmour, between the borders of Himachal Pradesh and Uttarakhand. And in the heart of this district, lies the holy site of Gurudwara Paonta Sahib. It is technically an industrial town but became a revered place owing to this ancient place of worship. It is considered to the most hallowed place for Sikhs, as well as for believers from other faiths. Every day, Sikh devotees from not only across India, but also from other parts of the world come to pay their respects and offer prayers. The gurudwara serves as an important site for religious activities and a significant place of worship.

The story of Paonta Sahib

There is a very fascinating legend of Paonta Sahib, which my grandma told me on our journey. It is said, that the Guru Gobind Singh, the tenth Sikh guru, found this town by happenstance. The legend says that Gobind Singh was traveling on his horse through this part of the country and happened to make a pit stop. He felt so warm and welcoming to this place and its people that he decided to stay here for as long as almost five years, which was quite unlikely for him since he was a traveling preacher. While staying here, Guru Gobind Singh penned the Dasam Granth (one of the holy texts of the Sikh), along with many other religious texts, before he moved to Anandpur Sahib later. Years later, the gurudwara that still stands today, was built in his honor and pay respect to his teachings. The gurudwara was originally named Paontika, which translates as a place where feet became stable. In other words, this is where the great Sikh guru found his footing ground.

We were traveling from Chandigarh, and with my grandparents, so we needed a reliable mode of transport. Luckily, we got to book a reliable cab from Chandigarh to Paonta Sahib and reached in about three and a half hours via NH 7.

Although it is in the plains of Himachal, at the foothills of the Himalayas, the town gives a taste of the mountain state, especially in its weather. We were traveling during late winters, which was neither very cold nor warm, making it the perfect time to enjoy nature in this part of the country. The surrounding greenery and the holy vibes of the town made it all the more divine.

Once we reached, our first stop was obviously the main gurudwara. The holy site is recognized by a palanquin, made of pure gold. The place was more than just a religious sanctum. It was more like a spiritual and social asylum for people, which reaches out to local communities and people in need. Every day, the in-house langar (kitchen) serves free meals to pilgrims and the poor. The gurudwara committee also holds important festivals and community events.

After our detailed tour of the gurudwara, we headed to yet another significant religious site. At only a few miles from the main town, lied the Bhangani Sahib Gurudwara. It sat strategically on the banks of the Yamuna River, rendering a stunning view of the white dome of the temple against the vast water body and green hills in the background.

Since we had the entire day to explore Paonta Sahib and we still had enough time in hand, we decided to make one more stop. At about 15 Km from our current location, lied the sacred site of Gurudwara Shergah Sahib. This place also boasts another legend of Guru Gobind Singh. It is said that when the great preacher was passing through the forests in this area, he encountered a man-eater tiger. Guru Gobind Singh beheaded the predator with a single stroke of his sword, which he always carried with himself. Thus, the gurudwara was built to commemorate his valiance and warrior spirit.

A slice of nature

As our last stop for the day and a resting point, we went to see the Asan Barrage. The most refreshing locale in the region, this huge water body was the result of a dam built on the confluence of the Eastern Yamuna Canal and Asan River. The expansive water bodies and its surrounding greenery gave rise to a wildlife refuge in the area. Every winter this place becomes a mecca of migratory birds, which I observed on our trip. From painted storks to terns and pipers, the banks along the barrage was lined with water birds.

Besides its religious significance, Paonta Sahib enjoys a beautiful geographical setting of the mountain state. Sitting on the banks of the upper reaches of the Yamuna River, on the backdrop of Lower Himalayas, the place was a delight to the eyes and fulfilling to the mind.

If you want to go exclusively for birding at Asan Barrage, visit between late November and early March.

Alwaysrent a car in Chandigarh with an expert driver, to make your journey convenient and comfortable.