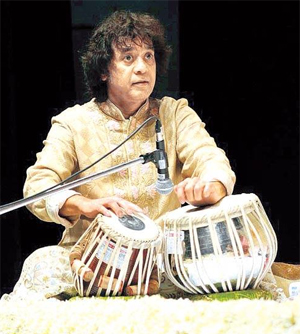 Zakir Hussain Alla Rakha Qureishi, one of the most accomplished Tabla player in the world was born in Mumbai on 9 March, 1951.The style and mastery over the Tabla seen in his brilliant performances have established him as a genius in the world of percussion both in India and abroad. This innovator has helped in bridging both the Hindustani and Carnatic traditions as well as the East and the West by performing with North and South Indian masters as well as with western musicians.

Zakir Hussain, son of renowned tabla maestro Ustad Alla Rakha, showed unusual talent on tabla drums as a child. He began his musical career at the age of seven and was touring by the age of twelve. At the age of 19, he accompanied the legendary sitar player, Pandit Ravi Shankar to the United States to perform at the Fillmore East. Three years later, he became the leader of the Tal Vadya Rhythm Band. The group subsequently evolved into the Diga Rhythm Band. In 1976, the band collaborated on a self-titled album with Mickey Hart of Grateful Dead. In 1975, Hussain joined with British guitarist John McLaughlin, Indian violinist L. Shankar and ghatam drummer Vikku Vinayakram to form the east-meets-west super group, 'Shakti'. Although the group disbanded in 1978, they reunited to tour as Remember Shakti in 1998. He founded Moment Records in 1992 which releases recordings and live concerts albums of great masters in Classical music.

In 1987, Zakir's first solo release, 'Making Music', was acclaimed as 'one of the most inspired East-West fusion albums ever recorded'. He has also composed and released many albums with the likes of George Harrison, Van Morrison, Joe Henderson etc and soundtracks of films like 'Apocalyse Now', 'In Custody', 'Little Buddha', 'Heat and Dust' etc for which he was nominated for the best music Director at the 1983 Cannes Film Festival. He arranged the opening music for the 1996 Summer Olympics in Atlanta.

Zakir has received many awards for his contributions to the world of music. In 1988, he became the youngest percussionist to be awarded the title 'Padma Shri' by the Indian government. In 1990, he was awarded the Indo-American Award, in recognition for his outstanding contribution to relations between the United States and India. In 1991, the President of India honoured him with the Sangeet Natak Akademi Award. In 1992, one of the projects 'Planet Drum' that Zakir Hussian did with Mickey Hart, received a Grammy for 'Best World Music Album', the Downbeat Critics Poll for 'Best World Beat Album' and the NARM India Best Seller Award for World Music Recording. This musical maestro continues to tour the world tirelessly in various live concerts. Zakir  married to Antonia Minnecola,an Italian American, Kathak dancer and they have two grown daughters, Anisa Qureshi and Isabella Qureshi.