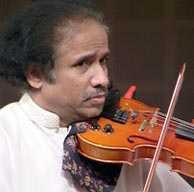 who has established himself as the foremost Indian composer in the area of East – West orchestral composition. Widely appreciated as an international phenomenon Subramaniam's electrifying performances has captured the hearts of music lovers in India as well as abroad. He is also one among the few greatest musicians in India,  who have helped to earn the violin, an international reputation as a South Indian solo instrument.

Subramaniam was born in Jaffna, Sri Lanka on July 23, 1947 in a musical family, including his famous parents renowned violinist  V. Lakshminarayana, a professor in the Jaffna College of Music and V. Seethalakshmi, a gifted vocalist. He grew up in an environment of music, and  learned violin from his father.  Subramaniam started playing professionally at the age of six and his debut performance was at a Murugan temple festival in Jaffna. At a very young age, he was honoured with the title 'Violin Chakravarthy' (emperor of the violin).

In 1958, his family migrated to Madras, India, due to ethnic riots in Sri Lanka. In Madras, Subramaniam with his brothers L.Shankar and L.Vaidynathan, formed a troupe, that toured throughout India. Their concerts became one of the main attractions of the Madras Festival Season. He gained considerable reputation as an able accompanist to the famous names in Carnatic Music such as Palghat Mani Iyer (Mrudangam player) , T.R. Mahalingam (Flutist) in India then abroad from 1977 onwards. 'Mani' as he is fondly known to colleagues conquered audiences with the elegance and virtuosity of his style.

Subramaniam who has been described as both 'Paganini and Poet' was a former medical doctor by training. But he  gave up his medical practice to devote all his attention to music.He took a Master's Degree in Western Classical Music from California Institute of Arts, U.S.A and mastered the art of orchestral composition.He has recorded and produced close to fifty recordings including a five-volume Anthology of Indian Music for the Ocora label of Radio France. He has written, conducted and performed with major orchestras including the New York Philharmonic, Swiss Romande Orchestra, USSR TV-Radio Symphony, Budapest Symphony, Oslo Philharmonic and the New Zealand Symphony, Astral Symphony  just to name a few.

Among his pioneering efforts are Reflections (Subramaniam prefers to call it Global Fusion), a symphony which combines various elements, traditions and instruments, including some rare ones, from different parts of the world. His albums include, 'From the Ashes', where Subramaniam jams with the renowned American jazz guitarist Larry Coryell; 'Eulogy', a tribute to his late wife Vijayashree using her own voice at the start; and 'The Southern Sky', a pure Carnatic ragam-tanam-pallavi fare, 'Conversations', 'Beyond borders' etc. He has also written a book on  Indian classical music and traditions 'Euphony'  with his late wife Viji.

He has also composed music for a few films including Mira Nair's films 'Mississippi Masala', 'Salaam Bombay', 'Eee Sneha Theerathu' (his wife Kavita also sang a song in this Malayalam film), and was the featured soloist in the film 'Little Buddha' by Bernardo Bertolucci and Ismail Merchant's 'Cotton Mary' (Ivory productions). He was also the music advisor to Peter Brook's historic stage production of the Mahabharata.

Bolshoi Theatre in Moscow, the Royal Albert Hall in London, the Champs Elysees Theatre in Paris, and the Lincoln Centre, the Madison Square Garden, United Nations in New York  are the famous theaters where Subramaniam brings out his enchanting charisma enthralling his fans.

He is also the  founder/director of the Lakshminarayana Global Music Festival in memory of his late father.  The festival is held every year in India, United States, Germany, Sri Lanka, Norway and other countries. Today this festival has become a famous music concert series across the globe.  Subramaniam has been running a charitable trust (Viji Global Arts) which conducts the Lakshminarayana Global Music Festival every year.

Subramaniam has received many awards and honours for his contributions to the world of music. Padma Shri in 1988 and Padma Bhushan in 2001 , Sangeet Natak Akademi Award (1990) for 'The Most Creative Artist' are some of the major awards he has received. He has been awarded the 'Nada Chakravarti' (Emperor of Sound) from H.H Sri Ganapati Sachchidananda Swami-ji at Trinidad (West Indies), and an honorary doctorate degree from the  Bangalore University and University of Madras. He has received an award for the best music for the television show Surabhi in Doordarshan. His album `Fantasy With Truth' was nominated for the Grammy Awards in 1981.

He was married to the classical singer Viji Subramanian, (who passed away in 1996) daughter of Hindustani vocalist Lakshmi Shankar and they have three children Ambi, Seeta and Raju. Subramaniam re-married in 1999 to well known Indian playback singer Kavita Krishnamoorthy and they are now settled in Bangalore.