Anya and Arys -- the juvenile Egyptian vultures -- after starting their journey from breeding grounds in the Kyzylkum Desert in Uzbekistan finally settled in northern India by covering 900-1,400 miles. 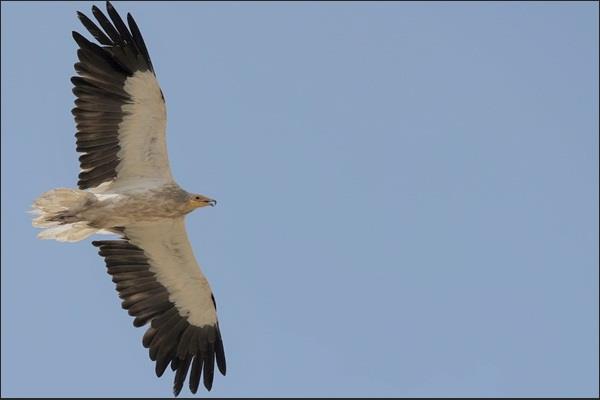 Two of the three vultures that researchers of the University of East Anglia in Britain tracked migrated to India, including one that has visited all three cities in the Golden Triangle and flew over the iconic Taj Mahal.

This is the first time that migration of this species has been described in Asia. The tracking work is important in identifying causes of decline and defining priorities for conservation for this endangered species.

A ground-breaking migration study has delivered unexpected and invaluable information which will help future conservation efforts for the globally endangered Egyptian vulture.

Migration is an extremely dangerous time for birds with hazards ranging from drowning and hunting to poisoning and electrocution, so this study's results are vital to help inform and shape conservation work aimed at protecting and increasing the remaining population, say researchers.

There are estimated to be only 135 breeding pairs of Egyptian Vultures in Uzbekistan where the project is based.

While similar studies have been undertaken in other regions, results from central Asia have been a missing part of the jigsaw. 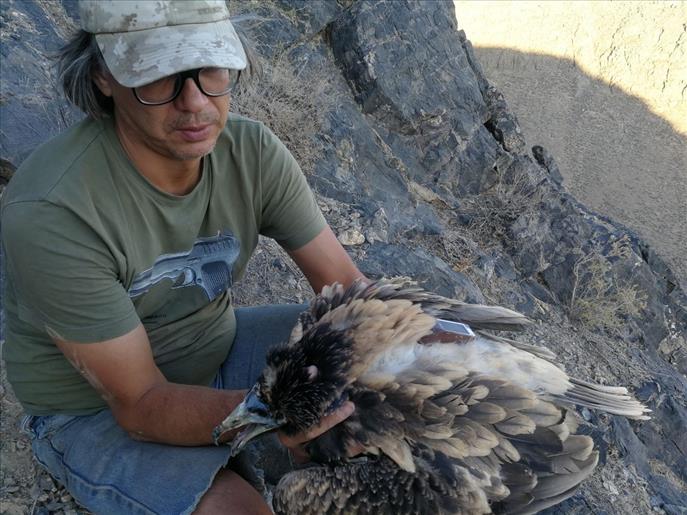 Anya vulture with satellite tag
Now the project team, co-led by Dr Robert Burnside at the University of East Anglia and with members Dr Vladimir Dobrev from the Bulgarian Society for the Protection of Birds and Anna Ten from the Institute of Zoology, Uzbekistan, can analyse the information they have collected to identify the type and location of threats faced by Egyptian vultures when migrating in this part of the world.

Anya, one of the tagged Egyptian vulture juvenile in the nest in Uzbekistan
At the start of the study, GPS tags were attached to juvenile birds at already identified breeding grounds in the Kyzylkum Desert. When the birds flew south for the winter, the team was able to record enlightening details as they tracked the full journeys of three birds -- named Timur, Anya and Arys.

Anya crossed into Iran and moved south through Afghanistan and Pakistan before stopping to winter in northern India having flown around 1,400 miles (2,300 km).

Anya followed a traditional route south from Uzbekistan and made a fairly direct migration south, avoiding mountain crossings, until she reached the Rann of Kutch, north of the Indus near Karachi, in Pakistan.

The Rann of Kutch (which actually spans parts of Pakistan and India) is known for its populations of Egyptian vultures.

Anya, however, only remained here for a few weeks then crossed the Indus and into the Thar Desert in Rajasthan, where she stayed in the deserts west of Barmer.

Judging from satellite photos, she has largely remained in remote areas and not utilised human refuse sites or dumps.

In contrast, Arys has shown quite a different migratory behaviour. Arys' route was much farther east and took him right over the Hindu Kush Mountain range in Afghanistan and Pakistan.

He then followed the ridge of the Sulaiman range in Pakistan all the way south, after which he directly crossed the Indus south into the Thar Desert.

Once in India, Arys has used man-made habitat several times, in the forms of slaughter areas and carcass dumps.

Notably, his first arrival point in India, Bhadriya, was near a livestock facility, after which he moved east to the town of Bikaner. Bikaner is famous for its carcass dump which attracts thousands of vultures and steppe eagles during the winter months. 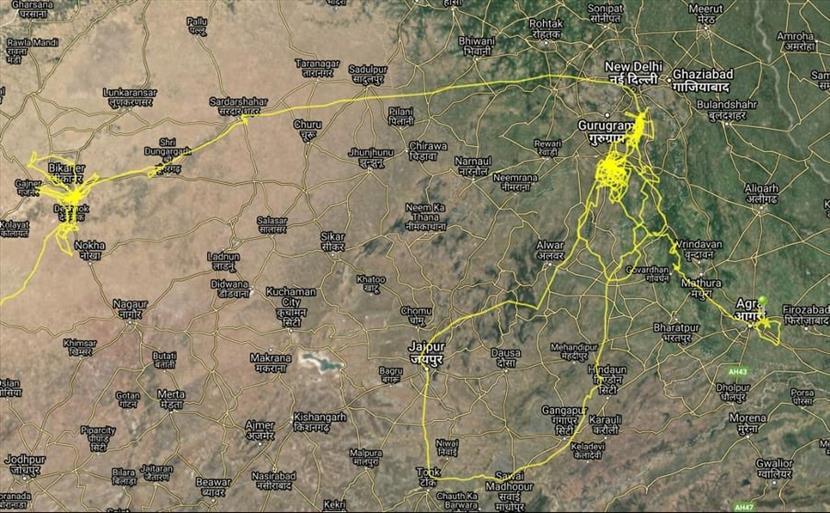 Wintering site movements of the Egyptian Vulture, Arys, through India, moving from the carcass dump in Bikaner to New Dehli and Agra. Most recent point shown with the dropped pin
Arys spent several weeks on this site before moving east again where he has spent more than a month just south of New Delhi.

He is a real tourist, as by the end of December he had visited all three cities making up the famous Golden Triangle -- New Delhi, Jaipur and Agra.

On his journey he flew over the India Gate in New Delhi and within 200 m of the world famous Taj Mahal where he remained until the time of writing.

Timur's journey was more unexpected for the researchers with his travel into Yemen and the Middle-East.

This is a major finding for Egyptian vulture biology and establishes for the first time that the central Asian populations are connected to the western Egyptian vultures that live in Europe, the Middle-East and Africa.

"These results confirmed what we had expected, namely that the migratory populations in Central Asia would join resident Egyptian vulture populations in the Indian sub-continent during winter," Burnside, a Research Fellow (Conservation and Reintroduction Science) with the University of East Anglia, told IANS.

"However, we did not expect the birds to migrate to Yemen in the Middle East. This establishes for the first time that the central Asian populations show connectivity to the European, Balkan, Arabian and Oriental Asian populations.

"Migration in European populations has been shown to be particularly dangerous with juvenile migrants susceptible to a high mortality from a range of threats, including drowning, hunting, poisoning and electrocution.

"These threats mainly exist in Africa and crossing the Mediterranean, but also in Yemen. In contrast, accidental poisoning by diclofenac and other veterinary drugs is the main threat in India and is potentially ongoing although much effort is being put into actively tackling poisoning in Asian countries as it is a recognised problem," say researchers.