It is a chilly morning in late September, the air brimming with the fragrance of Crocus sativus, the flower that produces the precious spice known as saffron, or zafran by its Persian name. 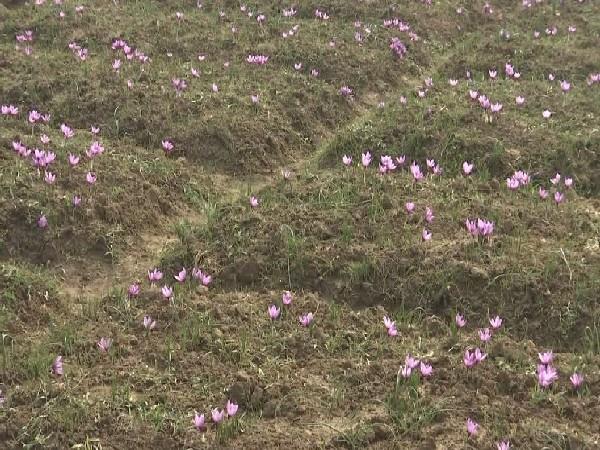 Against the backdrop of lofty snow-capped mountains and a road lined with willow trees sits a field as big as a football pitch, packed with purple blooms. Villagers have already busied themselves before the break of dawn, fighting the cold in their traditional pherans, and picking the delicate flowers in their wicker baskets.

The greatest step taken to protect pride of Jammu and Kashmir is awarding to it the Geographical Indication (GI) tag to keep the adulterators and fakes at bay. Saffron is worth its weight in gold. Kashmiri saffron has been associated with elegance, sophistication, and hundreds of years of history. It should not be seen as merely another agricultural product, but rather as part of the region's historic and cultural heritage, which must be conserved and safeguarded.

The coloring strength (crocin concentration), odour (safranal), and taste of saffron determine its quality (picrocrocin). Safranal concentration is high in the finest saffron. 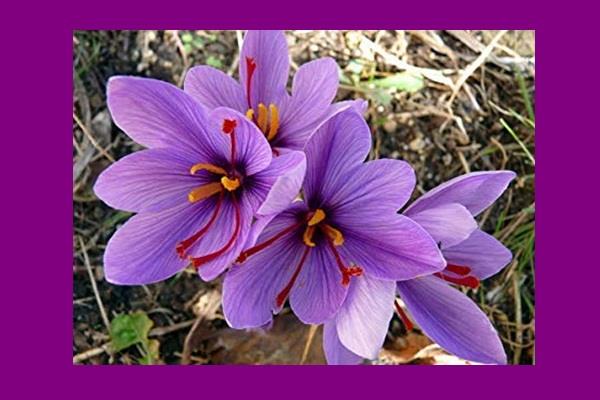 The Kashmir Saffron is famous worldwide due to its very high crocin & safranal content. The quality and high labour cost renders it a high price. The GI certification will help farmers get the best remunerative price and prevent the common practice of adulteration in saffron.

In the Indian subcontinent, saffron is known by many names: Zafran in Urdu (derived from Persian), Kesar in Hindi, Kong Posh in Kashmiri, and Kungumapoo in Tamil. It was given a status by the Mughals - the Turkic kings from Central Asia that made Kashmir their home in 16th century, taking saffron wherever they established court and introducing it into their cuisine.

Under the Mughal rule, saffron, as a colour and scent, became routine in the royal kitchens. It became well-known in biryani, the gold rice stacked with meat. It was used in lamb stews; in breads like sheermal, a sweet, thick flatbread dipped in saffron water that is today eaten in Lucknow, Awadh's capital in India's North; in fruit sherbets as a antidote for the tired; and in phirni, a rice pudding made with spices ( Saffron Spiced Rice Pudding) and enjoyed in North India and Pakistan. Saffron as Spice / Recipes with Saffron

How Saffron came to Kashmir ?

There are many local legends about how saffron came to Kashmir. One says that in 12th century Sufi saints Khawaja Masood Wali and Sheikh Sharif-u-din Wali offered a local chieftain a saffron bulb after he cured them of an illness while they were traveling. Another story claims that the Persians brought it with them in 500 B.C. to further trade and market. A third story brings the spice back to the Hindu Tantric kings who mixed it into hot water to create love potions.

While saffron's origination is questionable, there is a common consensus: Kashmiri saffron is the sweetest, most precious spice in the world. Its strands are thicker and more fragrant than its counterpart from Iran, who is responsible for 90 per cent of the world's saffron production. Kashmiri farmers sell it for Rs 250,000 or $3,385.

Kashmir's saffron is grown in Pampore, Pulwama district, south of Srinagar. Besides adding flavour to food, it holds immense importance in pharmaceuticals, cosmetics, perfumery, and the textile dye-producing industry. Pampore has enjoyed a bountiful harvest of the spice thanks to the National Mission on Saffron (NMS). Nodal Officer contact Numbers: 7006770223 / 9622110707 / 9419062672.

A geographical indication (GI) is a sign used on products that have a specific geographical origin and possess qualities or a reputation that are due to that origin. In order to function as a GI, a sign must identify a product as originating in a given place. In addition, the qualities, characteristics or reputation of the product should be essentially due to the place of origin. A geographical indication enables those who have the right to use the indication to prevent its use by a third party whose product does not conform to the applicable standards.

Saffron is grown in Kashmir due to its distinct geo-climatic conditions. These give the product a one-of-a-kind value and prevent it from being replicated elsewhere. However, due to adulteration, supposed illegal imports from Iran, and inadequate marketing and branding practices, this sector remains mostly untapped.

Saffron farmers and processors may establish more successful enterprises by combining the GI of Kashmir saffron with a smart marketing and branding technique. It can assist in the development of a dependable and well-known brand for Kashmir saffron. It will also help increase consumer loyalty, product distinctiveness and distinctness, legal protections, and higher profit margins, at both the national and international levels. 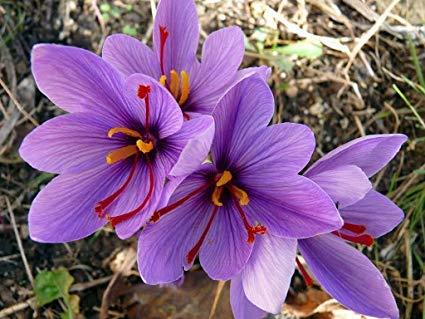 The saffron flower has three parts - the flower petals - that goes in for medicine, the yellow strands - which don't have much use, and the red strands in the middle - the pure saffron. A single flower produces just three red strands; and 1 gram of saffron is made from around 350 strands. So, for a kilogram of the spice more than 150,000 flowers are sifted and scanned. Unfortunately unscrupulous practices like selling the yellow strands mixed with the red are common.

Following are the goals of ensuring effective protection of 'Kashmir saffron' through GI; to:

*allow the commercial benefits of the brand 'Kashmir' to reach legitimate saffron producers in Kashmir.

The GI label will assist the tourism industry by projecting a positive image of the place. It's a useful market-access tool as it adds value to the items that are designated this title, allowing them to access larger markets. Producers will be able to promote distinct products with easily recognized qualities. Through this, agro-tourism can be given a boost. 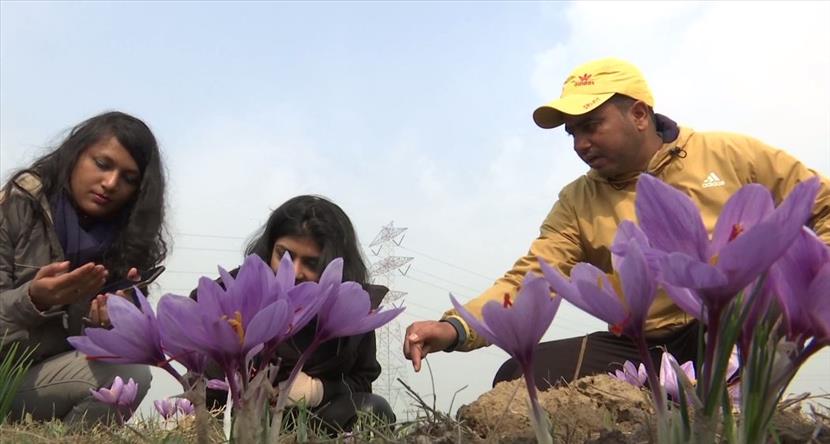 It will also encourage employment of local rural, shifting the attention of the youth from the widespread terrorism in the Valley to something productive and income-generating. The fields are a great source of motivation too; located along the national highway, tourists can be tempted to make purchases. It is a long-lasting marketing technique which will bring value to the region of Kashmir and increase faith and goodwill in the minds of people.

Thousands of kilograms of Iranian saffron is imported through various routes and blended with Kashmir saffron by several local vendors who have established clients across India. This activity has been going on for years, and the profit from this counterfeit transaction is in the millions of dollars. A growing number of farmers in Kashmir's saffron region have turned their saffron crops into apple orchards. Growers are forced to convert to fruit production since they do not receive acceptable prices for their goods.

Saffron is among the many products, like Walnuts and Namda, which give an exclusive profile to Kashmir. Saffron of Kashmir is the best in the world. Its uniqueness comes from the fact that it is grown at an altitude of 1,600 - 1,800 meters above mean sea level. It has longer and thicker stigma and aroma. Kashmir had nearly lost its name as a producer of world's best saffron; thanks to adulterators, so much so that the people have no identification of genuine saffron. Shopkeepers across India will sell you small pretty boxes of "Asli Zafran" claiming it to be Kashmiri, while in reality they are colored stands used in maximum sweets imitating Saffron.

GI certification should go a long way restoring Kashmir's saffron its old reputation and its foreign market. It is expected the GI tag will help Kashmiri saffron gain more prominence in the export market.

Lt Governor of the Jammu & Kashmir UT, G.C., said on July 25 that Kashmir's Saffron was the top priority of both the Government of India and his administration. Explaining the meaning of geographical indication, Principal Secretary in the Agricultural Production Department Naween Choudhary said GI certification would establish specific geographical origin which gives certain unique qualities to the product.

But the GI certification cannot be the end all; its goal has to be respectable earning for the farmer and the Union territory. It calls for at least two steps: (1) extending saffron cultivation area, (2) scientific publicity worldwide, to the uniqueness of Kashmir's saffron.

The extended cultivable area will give more yields and employ more farmers. And that Kashmir produces world's most unique saffron must be advertised in Europe and the Gulf countries using the latest techniques of communication illustrating the spice's various uses.

Saffron as Spice / Recipes with Saffron

South Asia must not be forgotten; it offers a vast market for Saffron. Arts and Crafts, which symbolize Kashmir in the world, also need government's urgent attention. In the last 3.5 years this industry and craftsmen have suffered, first because of insurgency and then because of frequent calls for 'Hartal' by separatist leaders. This industry did not die but was crippled.

Since 2003, India has used the GI system to safeguard more than 200 high-quality items depending on their geographical origin. Kashmir has six GIs in handicrafts including Kashmiri Pashmina Shawl, Kanni Shawl, Kashmiri Hand Knotted Carpet, Kashmir Walnut Wood Carving, etc - which have already established enormous goodwill and reputation on a global scale.