On the anniversary of the announcement of Gangetic Dolphin as the 'National Aquatic Animal of India', the World Wide Fund - India (WWF-India) on Tuesday announced to launch a 'Dolphin Mitra' programme for the conservation of Dolphins in the upper stretches of Ganga in Uttar Pradesh. 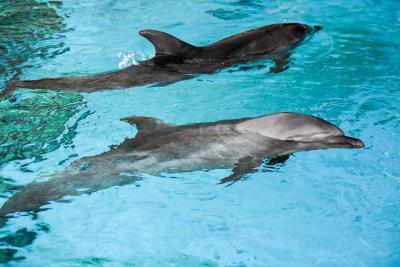 The 82-km stretch of Ganga from Garhmukteshwar to Narora is a Ramsar site and Bulandshahar is one of the districts in this stretch that has been identified for initiating the community network for the Dolphin Mitra programme to be carried out in collaboration with the Uttar Pradesh Forest Department. The other place would be Haiderpur, a wetland on Ganga near Bijnor.

This is part of Project Dolphin that was announced by Prime Minister Narendra Modi in his Independence Day speech last year. The holistic project is aimed at conservation and protection of dolphins in the rivers and oceans of the country.

Dolphins are recognised as 'highly endangered' species in Schedule I of the Wildlife Protection Act (1972). The docile and graceful river dolphin was declared as India's National Aquatic Animal on October 5, 2010.

"We are preparing a pictorial manual. The community members, as and when they sight it, can enter relevant details into the datasheet, such which place it was seen, big or small, does the location have any threats such as over-fishing, mining etc.," WWF-India's Director (Rivers, Wetlands and Water Policy), Suresh Babu, told IANS.

The surveys till now were periodic. But the stakeholders - such as a boatman or a fisherman - are there at the river all the time. WWF-India is banking on a similar 'Dolphin Mitra' programme that the organisation had carried out in river Beas in collaboration with the Punjab Forest Department in the Indus river system.

"Over the last year, we have received very enthusiastic responses. Thanks to this programme, we found that the dolphins are migrating upstream. It was possible only because Dolphin Mitras could keep track of them," Babu said.

As with Punjab, in Uttar Pradesh too, the local community members would be given basic training - how to identify a dolphin, how to know whether it is an adult or otherwise, etc.

They will be given a datasheet and they just need to fill the respective columns.

"This becomes a repository of incredible information around citizens' observation on dolphins," he said.

This will also help monitor dolphin movement. The WWF-India is going to rely on people who are passionate about the cause and are not working for any monetary gains.

The Ganga river dolphin is an endemic species of the Indus, Ganga, Brahmaputra and Meghna river systems, extending from the foot of the Himalayas to the tidal zone in India, Bangladesh, Nepal and Bhutan.

According to WWF, once present in tens of thousands of numbers, the number of Ganga river dolphins has dwindled abysmally during the last century owing to direct killing, habitat fragmentation by dams and barrages, indiscriminate fishing, and pollution of the rivers.

WWF-India had adopted Ganga river dolphin as a species of special concern and a Ganges River Dolphin Conservation Programme was initiated in 1997 to study the habitat quality of the dolphin's distribution range.