Birders were happy for an unusual sighting of Chinese Rubythroat (Calliope tschebaiewi) at the Haiderpur Wetland, 10 kms from Uttar Pradesh's Bijnor, that has taken the total number of bird count at this vast wetland to 320. 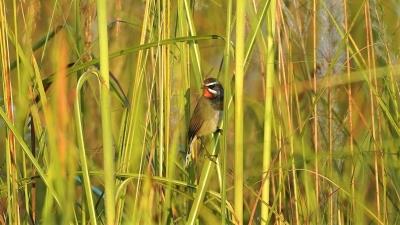 The Chinese Rubythroat differs from Siberian and Himalayan Rubythroat by the presence of white moustache stripe, as well as white panels and edges on a black tail.

"Mostly recorded in Ladakh and Northeast India so far, this can be its first ever sighting in the plains at Haiderpur Wetland," said birder and conservationist Ashish Loya, who has worked for the conservation of the Haiderpur wetland along with the locals and forest officials there.


Echoed Indian Forest Service officer Ramesh Pandey in Delhi, "This is one of the lesser seen birds, especially for the Himalayan foothills." Pandey has been a regular visitor to the wetland.

Loya and his protege, a local trained in birding and now working as a tourist guide at the wetland, Ashish Gujjar, spotted a single male Chinese Rubythroat in grassland patch, perched on tall flowering grass two days ago.

This is a migratory bird that has come to India for wintering.

The Haiderpur wetland is home to more than 300 bird species, 90 plus of them being migratory birds that visit in winters. This wetland is also a stopover site for migratory birds in Central Asian Flyway. It is fed by the Ganga river and a smaller stream Saloni river (it originates near Shukrataal, about 23 kms to the north-northeast of the barrage) and is part of the Hastinapur Wildlife Sanctuary. The wetland stretches across 3,000 acres -- with a core area of 1,200 acres -- from both Muzaffarnagar and Bijnor districts.

According to ebird.org, a crowd-sourced database of birds, Chinese Rubythroat (Calliope tschebaiewi) male is gray above with a bright red throat, black chest, and white belly. It has white eyebrows and moustache stripe, as well as white panels and edges on a black tail. Female is duller, cold gray-brown above with a white belly and throat.

"Breeds in alpine and subalpine open areas with scattered scrub and boulders; preferred habitat averages higher and more open than Himalayan. Winters in lowland scrub. Song is a series of loud rich warbles, which average shorter and less varied than those of Himalayan Rubythroat," it said.

Haiderpur wetland is a designated Important Bird and Biodiversity Area (IBA), and the Uttar Pradesh government has already submitted its proposal to get a Ramsar Site tag for the same.