The Cymbidium or Cym as it is affectionately known amongst Orchid lovers is one of the most beloved flowers in the world. It has been used in celebrity and common-folk weddings alike. It accompanies us into the rite of passage that is the High School Prom as a corsage and it looks over us as we pass underneath the gorgeous hanging flower pots that it graces. It is the silent watcher, giving grace to any event that marks out lives, making the occasion more memorable and significant with each application of its flora. 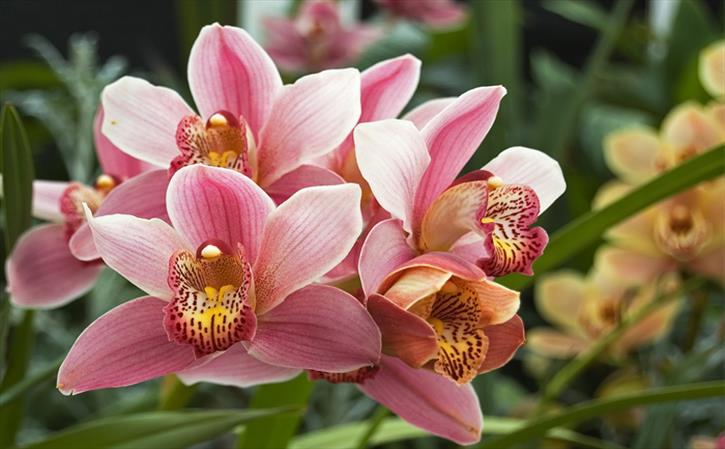 It is a flower that is thousands and thousands of years old hailing from the tropical and subtropical regions of Asia. It can therefore be found in countries such as China, Japan, the Philippines, India and Malaysia. It can also be found growing wild in Northern Australia. Its age brings with it a reputation of wisdom and respect. It also symbolizes virtue and morality and the Asian culture considers it a great honor to receive a Cym as a gift as it is considered a gift of respect and friendship.

In addition to its high standing reputation it is also considered a delicacy when eaten. In Bhutan, natives include the Cymbidium Hoookeranium in their curry step as a key ingredient. The Cymbidium Pedata gets the same level of respect in the kitchens there and is treated as a delicacy in other native dishes.

Cymbidiums flower in the winter months between January and April and their bloom can last up to 10 weeks. The 52 species of Cyms have been turned into hundreds of hybrids that pride us with a rich array of colours that can only be compared to the array of colours of a rainbow. They include: white, green, yellowish-green, cream, yellow, brown, pink, and red (and there may be markings of other color shades at the same time). The only two colours that are not graced by the Cym are blue and black. IN the standard Cym, the bloom can be 5 - 10 cm in width.

One of the reasons why the Cymbidium is so popular is its resilience to extremes of temperature. Cyms can tolerate temperatures that would send most other orchids into hibernation. They have been known to do quite well at temperatures as low as 45 degrees Fahrenheit. In fact, the cold is often what is used to trigger the Cymbidium blooms int he Winter months. Their tropical origins also leave them well adapted to cope with hotter temperatures. They thrive in bright environments, however do best out of direct sunlight. The fact that this orchid can offer up such an array of colour in the depths of winter make it a natural choice for florists during these months when many other flowers are in their growth phase.

Cyms can grow to heights of 60 cm and the Raceme species has been known to offer up flowers spikes of up to 90cm tall. The Cym has also been bred as a miniature flower. These flowers are packed along a flower spike of up to 30 cm long that protrude, pendant-like over the edges of hanging baskets. They produce stunning and colourful sprays of flowers that fill he arrangement and steal the admiration of all who pass.

For more engaging articles and information about Orchids, their care and their influence on the world visit The Online Center for Orchid Gardeners.