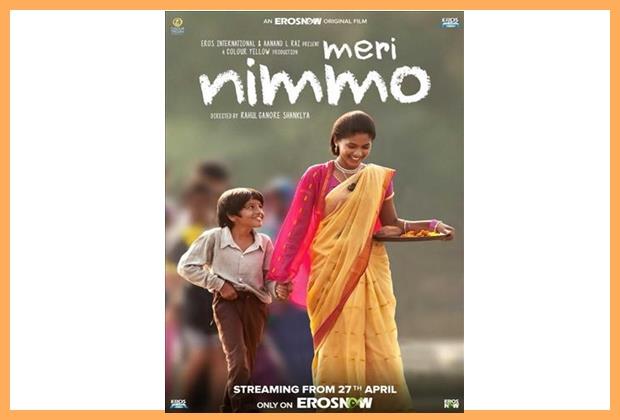 Meri Nimmo 2018 is a story about a young 8 year old boy who falls in love with a girl of double his age. The movie shows how a child mind work and how creative, deep he can think.

The movie has 3 songs and sung by Paroma Dasgupta, Sukriti Kakkar and Javed Ali. Udita Jhunjhunwala (Journalist of Firstpost) words, its an "uncomplicated and sweet story" which is absolutely correct. The Movie has few funny seen, and that make you Laugh. As we know Love never happens after judging someones age. It just happens on what kind of person you are.
The movie starts with Anjali Patil (as Nimmo) and Karan Dave (as Hemu) an extraordinary eight year old boy who has feeling for a 24 years old girl who lives in his neighbor (Nimmo). In short the movie is focused on 3 main characters, Nimmo, Hemu and Hemu's Mother (Sunayana Agarwal).

Hemu:
A boy who is confused about his attraction to a lady who is basically more of his age. After discussing the situation with his friend, he told him its Love.

When he get to know Nimmo is going to get married, then he tried lot of this to make it stop. And somehow he did too. He decided to give a Mangalsutra made up of some Iron pieces. He thought that might it will keep Mimmo with him for lifetime.

The movie show how innocent love could be. How bad someone could feel when you say something wrong about his/her love. Our Hemu did the same when few boys do bad talks about Nimmo.
In few scenes we seen Hemu try to look more like a men to show they could be perfect partners. Like: Oiling his upper lips area so that his Moustache grow up faster. In poster we seen Hemu wearing full paint.

After canceling the marriage with Amar Singh Parihar (Dulha), Hemu feels happy and out of world. But all this become worthless very soon ends with Hemu disappointed when he face the reality of Life.

Nimmo:
For Nimmo, Hemu is just a boy whom she treats as an innocent child whom she likes and want to spent time with. When her marriage got cancelled with Amar Singh Parihar (Dulha), she become upset and kept herself in a room. But Hemu cheer her up and soon they got a news that the boy side said yes for marriage. During marriage celebration Memo and her friends do a play where Hemu become Dulha and Nimmo become Dulan.

After all the convention activities, Nimmo try to find Hemu but when her eyes couldnt find him. She ask his mom to call Hemu. They hug each other and Nimmo sat in the bus. When she outside the window of bus she saw something very strange and she kept looking at it.