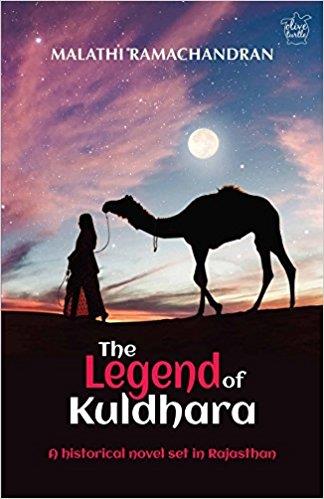 The story of the legend and curse of Kuldhara has always been a mystery as everyone is familiar with the incomplete ending that disappears into a void. In the book, "The Legend of Kuldhara", author Malathi Ramachandran picks up the loose threads left behind by history and weaves it into a beautiful and intricate novel.

The tale that history has told us is of a village in Rajasthan named Kuldhara which was deserted overnight by the prosperous Paliwal Brahmins after the cunning Diwan of the Maharawal of Jaisalmer, Salim Singh, cast his licentious eyes on the elder daughter of the Kuldhara village chief. Following this, the village people disappeared into thin air, leaving no trace of themselves. The mysterious part remains that they were never found.

The author goes on to add to the story what might or could have happened to these people, how their lives were altered or even shattered for many as they had to leave their homes in a single night and stray into the unknown, harsh deserts.

In a conversation with IANS through email, Malathi Ramachandran revealed: "Weaving a story out of meager information sounds very difficult and challenging. But it is actually a boon for a fiction writer because it is then possible to create a fresh world complete with its own characters and events and stories."

The strong pillars of this book are the two female characters, who despite having obstacles hurled at them, refuse to give in to the circumstances and stand firm as rocks. The author portrays the characters of Pari (elder daughter of the Kuldhara village chief) and Parvati (Salim Singh's wife) who though live miles apart are connected by an evil string, the Diwan. Though they have their low points, they keep their strength to accept and fight the challenges.

Depicting such female characters at a time, more than hundreds of years ago, when society had a strong patriarchal stench, isn't an easy task. However, what drew her attention was that these characters instead of looking out of place completely fitted the plot of the story.

"I have woven the plot keeping in mind that this was a hundred years ago, in heavily patriarchal times, when women were treated as chattels and pawns. In that sense, whatever happens to Pari and Parvati is natural, but how they decide to react is my own take on how a woman's strength comes out in adversity," Ramachandran said.

When asked how she went about writing the book with such varied characters when the Paliwals' disappearance has been shrouded in mystery, she said: "Based on the historical facts, I went about creating a detailed plot, storyline, and characters. I had decided to centre the story around the one woman who was not only the (unwitting) cause of the exodus but also its victim because the rest of the clan would always hold her responsible for their troubles. So I created the character of Pari. Then I realised that if Salim was a womaniser he would surely have an unhappy wife or two in his life. So I created the character of Parvati."

"My aim was to make the two women not just victims of their destiny, but strong enough to take their lives into their own hands at some point. As for the other characters, they were created to fit into the plot," she added.

The author narrates the story brilliantly delineating the life in a desert, village and in Jaisalmer in vivid colours as well as in a sombre mood. The Diwan, Kuldhara village chief's manager, and other characters all have important roles to play thus balancing and keeping at par with the main female characters.

"All the characters in my books are inspired in small or big ways by people I know or have met even fleetingly. Their looks, mannerisms, character traits are then built up and fleshed out to create a complete persona. When I returned from my first trip to Jaisalmer, the story of the people of Kuldhara and their Paliwal clan stayed with me. It lived and haunted me day and night until I felt I had to put it all down," says Ramachandran.

Stressing the importance of research in historical fiction, she said: "I strongly believe that historical fiction without research would lack authenticity and credibility. Various levels of research are essential to set the true cultural and political milieu for a period novel. I spoke to Paliwals, heard about their clan's great migrations over the centuries, how they came to settle in Jaisalmer and what made their ancestors abandon their villages that fateful night. I visited the city of Jaisalmer to familiarise myself with its architecture, food, and people."

The author has managed to take these characters from the path of rainbow hues to provide them unpredictable and knee-jerking twists of different hues. She knows exactly what she wants from the characters without them wobbling even once. That's what makes the book so readable.
TAGS: The Legend of Kuldhara,   Malathi Ramachandran,   book,   book review,   Niyogi Books,