In this age of growing terrorism and warfare, more and more weapons involving chemical, biological, nuclear or radiological elements are being developed and the possibility of attacks involving them have become a reality.

Terrorism has always been a threat globally but recently the threats have reached dynamic proportions with terrorists groups driven by distorted religious and cultural ideologies becoming powerful or willing enough to produce or use deadly weapons causing mass destruction, more over on Civilian targets.

The use of such weapons could kill large numbers of people causing mass destruction as well as spread panic and fear among the masses. It could cause lasting disruption and generate significant psychological impact on a population and its infrastructure. Such weapons include chemical, biological, radiological 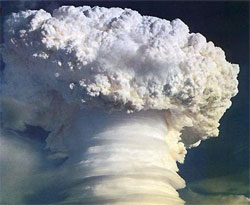 and nuclear devices. These deadly weapons are generally termed as Weapons of mass destruction (WMD).

Biological weapons are naturally occurring infectious organisms such as a bacteria or virus or toxins found in nature, used intentionally to cause harm. This includes both living microorganisms such as bacteria, protozoa, rickettsia and fungi and toxins produced by these micro-organisms or by plants and animals.

There is a long list of biological warfare agents which could be used as weapons. Some of the agents most likely to be used are infections like anthrax, plague, smallpox, tularemia, viral hemorrhagic fevers and naturally occurring toxins like ricin, botulisum toxin etc.

These weapons can be delivered by aerosolizing i.e spreading in the air so that they could be inhaled by the people or put into food or water supplies where they would be ingested. Many biological agents can also cause harm if contacted by human skin.

Anthrax : The bacteria 'bacillus anthracis' is a spore forming bacteria found in the soil which has two forms, the pulmonary and the cutaneous. This bacteria produces a toxin, of which the pulmonary is the more deadly. A pneumonic anthrax infection starts with ordinary cold symptoms, then fever, fatigue, respiratory distress and septic shock which can be fatal.  Death can occur within 24 or 36 hours if left untreated. There is a good chance of survival if vaccinated before exposure and treated with antibiotics after exposure. Pencillin vaccines are taken as treatment. A recent well publicized Bio terrorism attack using anthrax broke out in the United States in the fall of 2001.

Pneumonic Plague : The Plague caused by the virus from infected flea bite can develop into the virulent and contagious form of pneumonia, the Pneumonic plague. Fever, cough, chills, breathing difficulties culminate in rapid shock. If left untreated, the disease can kill 50 to 90% of the masses infected. If diagnosed and treated with antibiotics as soon as possible, then there are chances of 85% survival.

Ricin : Ricin is a toxin produced from castor bean. If infected, the symptoms are nausea, fever, convulsions, muscle spasms, respiratory distress- due to fluid build up in the lungs ending in death. Exposure to the toxin can kill in three days. No antitoxin or vaccine available as treatment.

Small pox : Small pox is a highly infectious viral disease. The symptoms are fever, rashes all over the body with pus filled blisters developing. The disease can cause kidney damage, blindness and pneumonia. There is vaccination available as defense. If not inoculated, the mortality rate can be about 30%. The disease naturally occurred last in 1977 after which it was eradicated through aggressive worldwide vaccination campaign.

Botulism Toxin : It is a toxin released by the bacteria 'Clostridium botulinum'. The bacteria occurs naturally with rotting food in infected cans. The toxin, the most poisonous substance ever known if ingested or breathed in, can cause nerve disruption. Symptoms are flue like symptoms, slight numbness in lips, fingertips, double vision, chest paralysis and respiratory failure which can be fatal. If left untreated, it can cause sure death. Treatment is by administration of antitoxin. Full recovery can take months.

Tularemia or Rabbit fever: This infection occur among the wild animals in the Northern Hemisphere. Ticks in contact with the infected animal can spread it to humans by biting them. The incubation period is from two to ten days. The symptoms are skin irritability and ache in the place bitten, swollen glands, high fever etc. Fatal in about 5% of the cases, more if left untreated. Treatment is with antibiotics and there is no anti vaccine available.

Chemical weapons are chemical agents or poisons which are non-explosive but used intentionally to cause harm or death. They are not living organisms by themselves. Chemical warfare agents can include Nerve gases, mustard gases, Hydrogen Cyanide based agents, Arsines, toxins, teargases and incapacitating agents like psychotomimetic agents etc. Chemical Warfare agents has been in use from early as the first World War. Some examples of chemical weapons include :

Sarin : Sarin is a nerve agent which is a highly toxic, ordorless gas. When exposed it penetrates through the skin, eye or respiratory system. Symptoms are severe headaches, sweating, blurred vision, chest tightness vomiting , convulsions and respiratory failure resulting in death. Lethal dosage of the gas can kill within two to fifteen minutes. Treatment is immediate decontamination or avoiding contact by using compressed oxygen mask. The gas can be sprayed from the air or dispersed using artillery shells.

Mustard Gas : It is a mustard agent which is a gas which smells like garlic or mustard and has a brown or yellow appearance. The symptoms of exposure are red and itchy skin, runny nose, shortness of breath etc. Inhalation or skin exposure can cause long lasting painful blisters all over the body and can lead to lung and respiratory cancer. Death could occur only to less than one out of ten. The gas can be dispersed by spraying, put in artillery shells or the liquid form can be poured on the ground.

VX : VX is a nerve agent, which is an ordorless, oily, amber liquid. It blocks the transmission of impulses down the body's central nervous system causing convulsions, respiratory paralysis and death. VX penetrates through the skin, eyes or respiratory system and the symptoms are runny nose, pinpoint pupils, drooling, sweating and nausea. Even a small dose of 10mg (a drop) on the skin or 50 mg if inhaled can be lethal. As a weapon it could be sprayed from the air or poured to contaminate the ground areas.