The word tsunami has now become familiar to even a kid in a short span of time with its gravity. But, what is tsunami? What does it mean and how is it caused by earthquakes? A tsunami is a wave train, or series of waves, generated in a body of water by an impulsive disturbance that vertically displaces the water column. Earthquakes, landslides, volcanic eruptions, explosions, and even the impact of cosmic bodies, such as meteorites, can generate tsunamis.

Tsunami is a Japanese word, which means, "harbor wave." "Tsu," means harbor, while the "nami," means, "wave." Tsunamis can be generated when the sea floor abruptly deforms and vertically displaces the overlying water. Tectonic earthquakes are a particular kind of earthquake that are associated with the 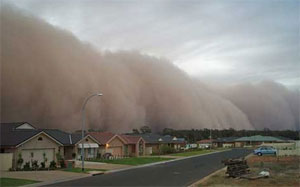 earth's crustal deformation; when these earthquakes occur beneath the sea, the water above the deformed area is displaced from its equilibrium position. Waves are formed as the displaced water mass, which acts under the influence of gravity, attempts to regain its equilibrium. When large areas of the sea floor elevate or subside, a tsunami can be created.

As a tsunami leaves the deep water of the Open Ocean and travels into the shallower water near the coast, it transforms. A tsunami travels at a speed that is related to the water depth - hence, as the water depth decreases, the tsunami slows. The tsunami's energy flux, which is dependent on both its wave speed and wave height, remains nearly constant. Consequently, as the tsunami's speed diminishes as it travels into shallower water, its height grows. Because of this shoaling effect, a tsunami, imperceptible at sea, may grow to be several meters or more in height near the coast.

When it finally reaches the coast, a tsunami may appear as a rapidly rising or falling tide, a series of breaking waves, or even a bore.