Chill weather and freezing winds of Nagaland did not stop the flow of tourists to this spectacular venue on top of the eastern himalayas near Kohima. Once again Kisama heritage village in Nagaland groomed herself in vivid colours yet conserving the traditional values. Every year, in December, the village adapt itself to welcome guests from all around the world. The festival that is famous as the festival of festivals is organized by the State Tourism Department in collaboration with the Art & Culture Department during the first 10 days of December. 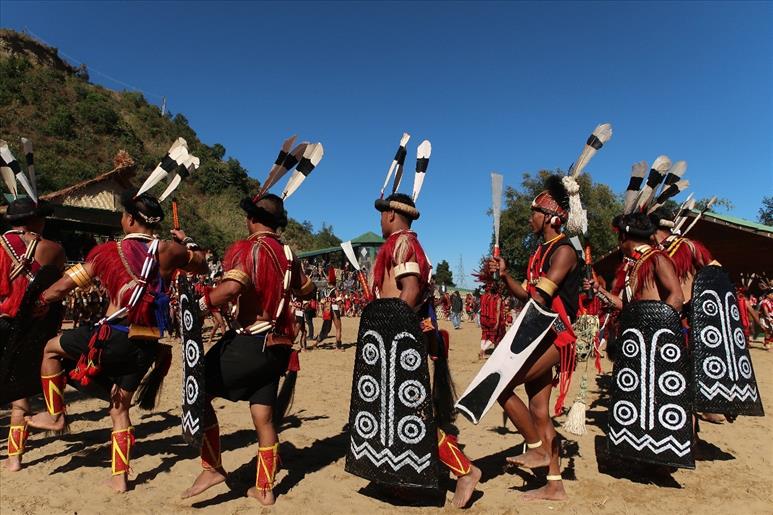 Though hornbill is not the state bird of Nagaland, the festival is named after the colourful Great Indian Hornbill, which is portrayed in many of the Naga folktales.The tribesmen of Nagaland believes that the bird represents their tradition and its musical cries keeps the integrity between their tribes.

Our journey began on 20th November of 2017 to witness the cultural extravaganza in the courtyard of Nagaland - Kisama Village. Though we aimed to reach our destination on 1st of December, the minor obstacles on our way delayed our arrival by two days.

The capital of Nagaland - Kohima, in fact a smaller town comparing to Dimapur - the largest city of the state, was overflowing with tourists. Even the homestays organised within the heritage village were not sufficient for many to find a space within. Thanks to Rev. Fr. T S Varghese and his friend Mr. Baby who arranged our stay in a hotel in Dimapur. From Dimapur Kisama village is approximately 76 kilometers, after Kohima.

As we reached the Kisama hills, on the third day morning, the tribesmen of Nagaland were walking out from the main venue in two rows to receive that days chief guest. We were thrilled to see them in their traditional attires. Mostly their dresses were just enough to cover their nudity, but not sufficient to protect them from the early winters intensity. Yet, they followed the traditional norms - so vivid and splashy. 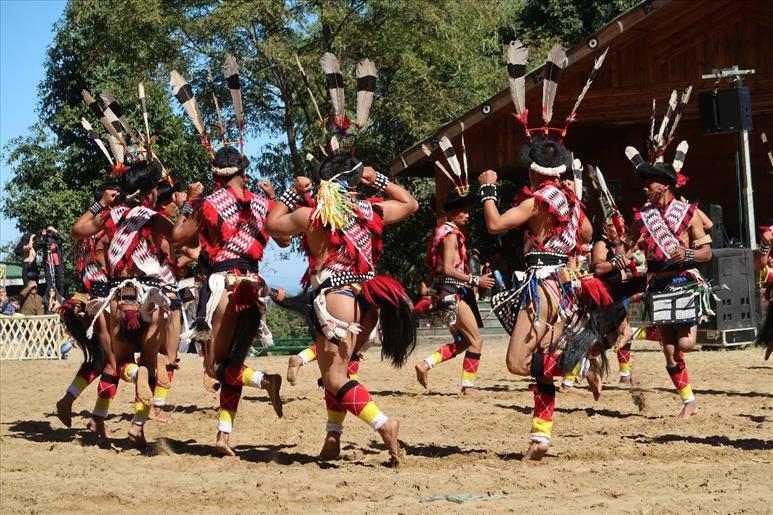 It took almost an hour to welcome the guests in their classical manner, but as the tribesmen started performing to the rhythm of tribal musics, the village turned lively. Cameras clicked and people applauded in appreciation. I found a small place close to the amphitheater and stood on my knees through the performance, for not to miss any moment from those thrilling dancers. They danced to represent farming, harvesting, war, hunting, and even a detailed feast. Wrestling being the part of Naga culture, they also demonstrated an act in front of the guests.

After the morning digest, we went around the heritage village to explore various tribal huts with their cultural exhibits. We started off with the Chakhesang hut where I tried tasting a ground chutney from sesame seeds, mustard seeds, ginger, and garlic. The penetrating flavour of the chutney surely tickle my tongue. Among the favourite cuisines of Nagaland included roasted pork, deep fried pork, smoke fried meat, smoke fried dog meat, pork and snail soup and hot salad.

While I enjoyed the smoke fried pork, I did not try dog meat. However, the deep fried pork with Ao tribe rice and rice beer made my lunch so delightful. After such a rich lunch, like most other tourists, we too posed with the local people to take a couple of snaps. 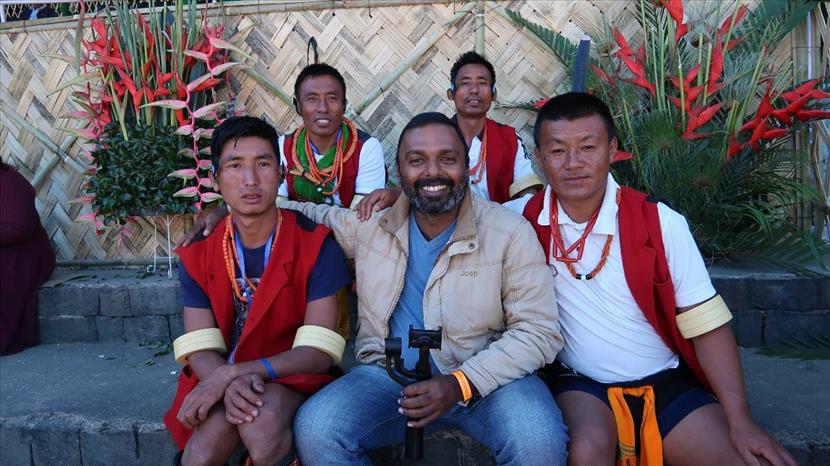 Furthermore, to edge an adventure during our hornbill festival eve, I tried my hands on an old model double barrel gun.

Unlike in the south and west, in Nagaland, sun sets by around 4:30. A group of youngsters fixed a few campfires that offered the needed warmth and comfort. On the center stage a musical troupe sung and danced carol songs announcing the arrival of Christmas. With a glittering sky above us and a soothing music in our ears, we drove back to Dimapur holding on to the hued memories of Hornbill Festival.