They are not-so-mute witnesses to history, clanging away at intervals of 15 minutes, as if asking us all to grab the moment because time was slipping by.

Perhaps in the daily, mad rush in Maximum City, not many Mumbaikars pay attention to the 16-odd time-keepers of the city, some of them centuries old. But they have seen dramatic changes as Mumbai evolved from a conglomeration of fishing villages into a burgeoning metropolis -- a modern, global financial centre accommodating 17 million people that often appears to come asunder at its seams. Yet, they have been evidently bypassed in the Swachh Bharat campaign.

"I was once permitted to go up the tower to click Mumbai views, but came across a lot of dirt, pigeon droppings and even dead birds. If people are allowed to visit them regularly, maintenance will be better," historian and archaeologist Mugdha Karnik told IANS.

She says clock towers are an important aspect of any city's history and should be more accessible to the masses, especially in Mumbai. 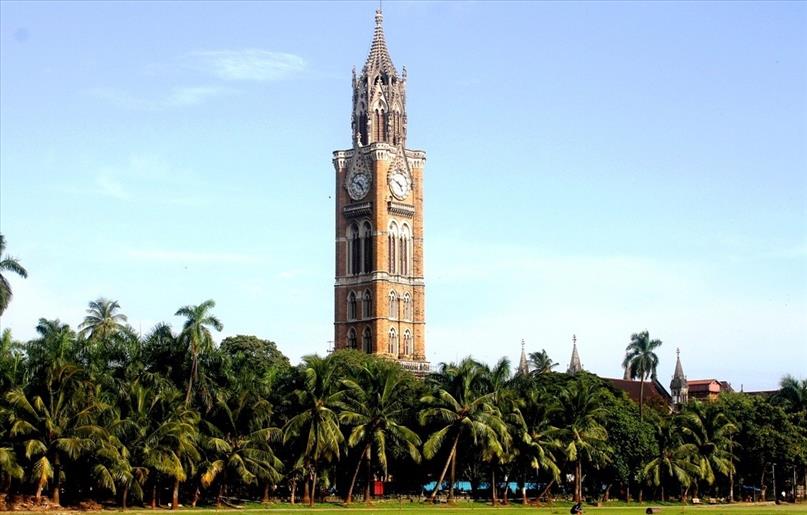 The most famous of the lot is, of course, the Rajabai Clock Tower adorning the entrance of the University of Mumbai, which once played God Save The King and a Handel Symphony with 16 tunes that kept changing four times a day -- now limited to chimes every quarter of an hour. But it still makes heads turn with people glancing at their own watches to match the time.

The iconic 280-feet tall structure, once visible from distances of 15 km, entered the 140th year of its existence in November. It has seen the reclamation of land beyond the present Oval Maidan, which pushed back the Arabian Sea by nearly 200 metres. Access to the top, which offered a panoramic view of Bombay, was stopped a few decades ago after it became a suicide point.

There is a Time Ball Building clock tower in the Mumbai Port Trust, which is not functional, another at Sasoon Docks Gate in Colaba, Lakshmi Insurance Building in Fort, Fulchand Nivas Building at Chowpatty, Mhatre Pen Building and Vijaynagar Building, both in Dadar to the north, and a few stray ones in other parts of Mumbai.

"Several conservation activists regularly keep in touch with the owners of these premises on the status of the clock towers and they are very cooperative as it is a part of the city's rich heritage and history. The Mumbai Port Trust is even considering setting up a museum at the site," Desai said.

Every clock tower is unique, each having its own history and importance for the city, he said.

For instance, Rajabai Tower was financed by "Cotton King" Premchand Roychand, one of the original founders of the modern-day Bombay Stock Exchange Ltd. It was designed by Sir George Gilbert Scott on the lines of London's Big Ben and built in nine years for what was then a staggering amount of Rs 550,000.

It is named after Roychand's blind mother, Rajabai, who was a staunch Jain and needed to have her meals before dusk, and the clock chimes helped her do that without needing to depend on anyone.

The massive clock above the CSMT -- which was one of the sites targeted during the 26/11 Mumbai terror attacks -- was built in 1888 by Sir Frederick William Stevens, inspired by the Victorian Gothic architecture of London's St Pancras Railway station.

It's now a UNESCO world heritage site and the imposing clock sees millions of commuters hurrying past daily or tourists gaping and photographing it. Recently, the BrihanMumbai Municipal Corporation (BMC) has built a "selfie point" off the CST and the BMC headquarters to help people click pictures of the heritage precincts.

It was in the 1860s that Albert Abdul Sassoon, son of a Baghdadi Jewish philanthropist, came upon the idea of settng up a good library in the heart of the city. It materialised in 1870 as the David Sassoon Library at Kala Ghoda, near the Jehangir Art Gallery.

It is built with yellow Malad stone, like the nearby Army & Navy Building, Elphinstone College and Watson's Hotel, with a proud white stone bust of David Sassoon adorning the library entrance.

The Sassoon Docks, with a large clock tower, is one of the oldest fishing docks of Mumbai built on reclaimed lands in Colaba and constructed in 1875 by Albert Abdul Sassoon as a prime fish unloading and trading spot, which remains operational till date.

The Crawford Market, renamed Mahatma Jyotiba Phule Market, is a stone's throw from the CSMT and opposite the Mumbai Police Headquarters.

Blending the Norman and Flemish architectural styles, the freizes at the entrance depict Indian farmers and fountains made of Kurla stone, designed by Lockwood Kipling, the father of the legendary novelist Rudyard Kipling.

The Time Ball Building clock tower at Mumbai Port Trust is just one of the two surviving -- the second being in Kolkata -- and among the handful in the world, like at Greenwich, UK. Desai says it is an important piece of historical heritage and must be protected.

Perhaps it's time to step in and preserve the towers which may otherwise become the victims of, well, time. (Quaid Najmi can be contacted at q.najmi@ians.in)