Title: The People Next Door - The Curious History of India-Pakistan Relations 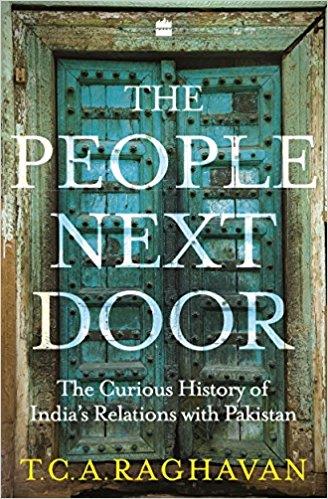 
Shifting from cordial and promising to suspicious and hostile (and back again), regularly overshadowed by history, ideology and perceptions, prone to public posturing but also quiet, behind-the-scenes pragmatism, Indian-Pakistan relations possess their own unique and complex logic, which even the eminent political scientist Hans Morgenthau would find hard to explain.

And these relations can have wide ramifications and resonances -- both in high international politics but also domestic, as we learn in this book. The first was seen during the 1965 war, which also left two Southeast Asian nations engaged in their own spat, or in 1971, when two leading Communist powers virulently assailed each other at the UN Security Council.

A good example of the second was how the decision of Indira Gandhi to accept the mandate against her in the 1977 (post-Emergency) general elections was seen in Pakistan -- which had its own share of political upheavals that year. A small aside was Mrs Gandhi's tart response to a Pakistani dignitary's invitation to visit -- but actually aimed at then Foreign Minister Atal Bihari Vajpayee, who was sitting on the other side.

Beyond these, the Partition, Kashmir, river water sharing, terrorism, the nuclear arms race and many other facets, including cooperation, make India-Pakistan ties cover a large and complex canvas, painted and repainted over for seven decades, leaving those well-versed at one point not as adept later.

But the attempt to decipher it has to be made with the latest effort by former Indian High Commissioner to Pakistan T.C.A. Raghavan, who admits it is not a very easy task since "every facet of the relationship has over the decades been scrutinised and commented upon in detail..." and public knowledge is "considerable".

Asking "how much more can possibly be written about a relationship which has been bad in the most conceivable ways" since the countries came into being, Raghavan, who had two tours of duty in Pakistan, notes that his own experiences "had been marked by a near-constant discovery of something new about the past".

These, he clarifies, are not "new" facts but a new look at events and their connections, which gives a more nuanced and more rounded perspective to the course of ties to "impart a fuller sense of how and why things developed as they did".

This approach and its considerable scholarship, manifested in both wide ranging and absorbing minutiae, is what makes the book a usefully incisive and informative addition to the considerable literature, of all kinds and approaches, already available.

Raghavan, who begins with showing how issues that would bedevil relations down the years came within roughly a year of Independence/Partition, also dwells here on some lesser-known/understood matters such as the first water crisis and the issue of Kalat (expanding to entire Balochistan down the ages).

Alongside, there is the curious case of Rahmat Ali, who coined the name "Pakistan" but found no place in it, three case studies of "Muslims who would, in the the normal course, have been the pillars of the new Pakistan but moved in the opposite direction", and largely unknown cases of cooperation between the two nations even as conflict was raging in Kashmir.

And then there are nuggets of interesting trivia like a master criminal who fled to Pakistan and whose extradition India unsuccessfully demanded (hint: it was not Dawood Ibrahim)

Raghavan, who follows a chronological approach, also stresses that instead of trying to be "exhaustive", he aims at bringing a "fuller flavour" in a "more subjective and selective view of both well- and lesser-known incidents and individuals in a broad context of the principal ups and downs of the relationship".

And towards this, he draws upon not only diplomats and politicians, but also journalists, activists and others to provide a new perspective on prominent milestones, but also the promise in the late 1950s-60s, in the short Rajiv Gandhi-Benazir Bhutto era, the early Musharraf years, et al.

Even those who think they know all, will find some new perspective in a book which, the author notes, deals with "history", not "policy".

Even as he confesses to an Indian perspective of a "divisive and deeply contested past and present" - Raghavan showcases how, here, it is not what happened, but what is perceived to have happened -- and remembered -- that is the key.

It is this legacy we need to understand and overcome for a better future.