Works of art and paintings have been an integral component of India's versatile culture and a recent book attempts to capture minute details and important facets of the scroll paintings of Bengal. The author says that the art has enough admirers to ensure its survival. 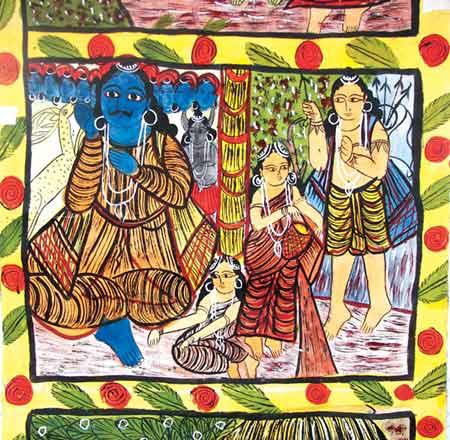 "The future of Bengali pata paintings looks healthy to me. Even with the charm of electronic arts growing stronger by the day, people are drawn to patas, perhaps more today than 50 years ago," the author, Mandakranta Bose, told IANS in an email interview.

"Several cultural organisations and the West Bengal state government continue to nurture the production and marketing of patas and the patuas (scroll painters) themselves are skilled at presenting their work to the public, for instance, at the Calcutta Book Fair. The art of the pata may not be as popular as Bollywood movies but it has enough admirers to ensure its survival," she added.

"The Ramayana in Bengali Folk Paintings" (Niyogi Books/Rs 795/130 Pages) attempts to explain how scroll paintings have become an inseparable part of storytelling, inculcated as a prerogative of the itinerant bard and the village artisans of all times.

Treated as "heritage" throughout Bengal, the paintings are drawn in colourful and vibrant style on "patas", or scrolls, with vegetable colours and other indigenous dyes. Each scroll depicts one single incident or episode from the epic and the next set of narration follows the other, forming a narrative format that is much like a film roll or a comic strip.

"Some years ago in Medinipur district of West Bengal, while I was investigating more on the paintings, a 'patua' painter compared Rama to George Bush in his paintings. While Rama succeeded in bringing his warriors home, would Bush be able to do the same for his soldiers fighting in Iraq, was the question the painter tried to ask through his works," Bose recalled.

The author said that it is in this way that the 'patua' painters make the past relevant to the present.

Although painted scrolls are found in many diversified folk art traditions of India, Bengali scrolls stand out for their sustained and elaborate narrative treatment, built upon "focused plots and clear-cut characters" reflecting specific themes. In the context of the technique as well, the paintings can be distinguished by their gallant colours and bold lines, she said.

The author of this well-researched book was first introduced to the patas of West Bengal at a friend's home in Kolkata.

"Over the years, on my visits to Kolkata, I came across more and more of these paintings in the circles of my academic friends. I also found out that this art form was slowly gaining popularity amongst art collectors and academicians. The more I looked at these patas, the more I was drawn to them as much for their artistic form as for their narrative power," she added.