The atmosphere contains an estimated 13,000 trillion litres of water -- equivalent to nearly 10 per cent of all fresh water present in lakes worldwide -- that has remained untapped.

Now, a team of researchers in the US, including two of Indian origin, have developed a device that extracts potable water from ambient air using only sunlight as the energy source. 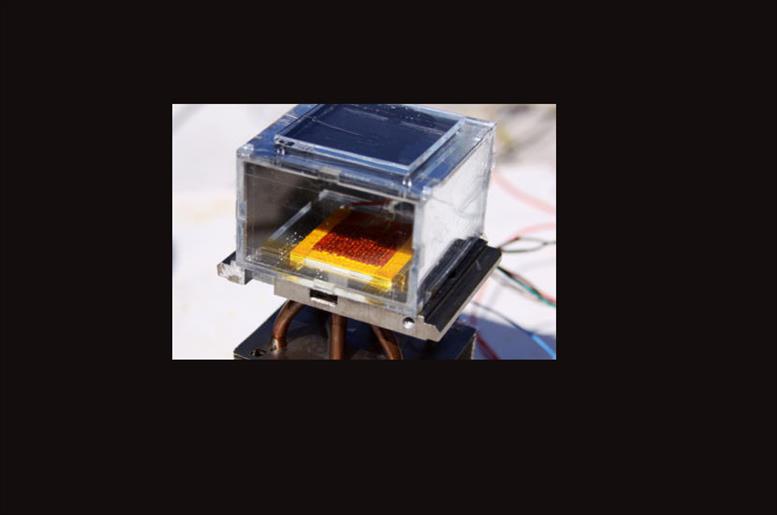 The water harvester, built at MIT, uses MOFs synthesized at Berkeley to suck water from dry air. The harvester uses sunlight to heat the MOF, driving off the water vapor and condensing it for use. Photo Courtesy:http://yaghi.berkeley.edu/
The solar-powered water harvester works even when relative humidity (RH) is as low as 20 per cent, the level common in arid areas and deserts of the world, the researchers report.

"This is a major breakthrough in the long-standing challenge of harvesting water from the air at low humidity," Omar Yaghi, chemistry professor at the University of California-Berkeley and one of the corresponding authors, told Nature India.

"The key development in our demonstration is that we used only ambient sunlight, with no electricity needed," Yaghi said. "This is a major improvement over most other air-water harvesting devices which require energy input and therefore are economically not viable."

"I believe this device will work well in most areas of India," Yaghi said. Largescale use of this device "can change the landscape of water utilisation in India, where sunlight is abundant", added co-author Sameer Rao, a post-doctoral associate at the Massachusetts Institute of Technology (MIT).

The heart of the new device -- constructed at MIT -- is a metal-organic framework (MOF) that belongs to a class of unique materials exhibiting extremely high porosity that Yaghi's team had pioneered in the 1990s at Berkeley.

"They have high affinity to water molecules to pull them out of ambient air, but do not hold on to them too tightly so that water can be concentrated and released with a slight temperature change (induced by sunlight)," Yaghi said. The adsorbed (as a thin film) water thus released is then stored by the device in a condenser.

The adsorption-desorption experiments performed in a RH-controlled chamber in the laboratory found the device was able to pull 2.8 litres of water from the air over a 12-hour period at RH levels as low as 20 per cent using one kilogram of MOF. Rooftop tests at MIT confirmed that the device works equally well outdoors.

The scientists found the experimental data to be in "good agreement" with a theoretical framework they had developed.

Yaghi said the daily quantity of harvested water can be scaled up by finding better MOF materials "with enhanced sorption capacity and high intra-crystalline diffusivity" that could absorb more water. The current MOF can absorb only 20 percent of its weight in water.

An official statement released about the solar water harvester said that while Yaghi and his team at Berkeley are at work improving their MOFs, Evelyn Wang, the other corresponding author who led the team at MIT, "continues to improve the harvesting system to produce more water".

It quoted Wang as saying: "We wanted to demonstrate that if you are cut off somewhere in the desert, you could survive because of this device."

Its developers hope their device, when commercialised, could help every household obtain the drinking water it needs out of the air using only the power of the sun.

"The social impact of this in India would be far-reaching," said Rao.

"It would enable greater success for government's grassroot level programmes seeking to increase literacy and education of women and children in villages" because they would be freed from the everyday job of fetching water for cooking and drinking.

How much would the solar water harvester cost?

"We have made the significant first step by building the demonstration model combining chemistry and engineering to show how it works," Yaghi said, adding: "The economic aspects as well as the production of these materials and devices are the obvious next step."