As the population of the western Tragopan, a brilliantly-coloured Asian pheasant species, hovers on the brink of extinction globally, Himachal Pradesh is engaged in breeding its state bird in captivity.

The world's only breeding centre in Sarahan town, located some 160 km from the state capital Shimla, has 26 breeding birds. Five chicks were born in 2016. "Currently, we have 12 female and 14 male western tragopans," breeding centre biologist Lakshmi Narasimha said.

The pheasantry is jointly funded by the Central Zoo Authority and the wildlife wing of the state Forest Department. 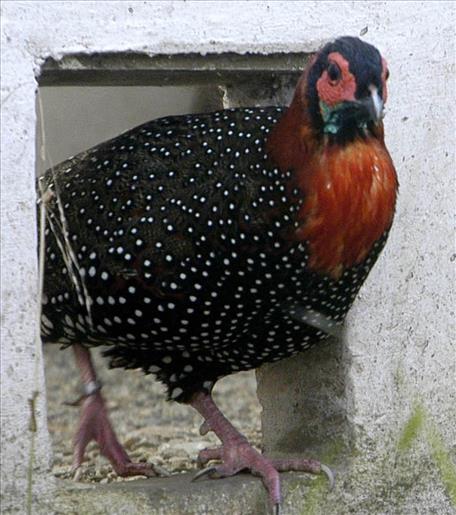 The western tragopan is listed in the Red Data Book of the International Union for Conservation of Nature (IUCN), a compendium of species facing extinction.

It is the least-studied bird in the world owing to the tough topography of its habitat and being a shy bird.

The first breeding in the centre, which was earlier used as a rehabilitation centre for rescued wild birds, was way back in 2005 when a western tragopan was bred in captivity for the first time in the world.

Subsequently, the Sarahan pheasantry was designated as a western tragopan conservation breeding centre in 2007.

John Corder of the World Pheasants Association was consulted on the overall management of the birds.

Narasimha said in the past five years, 23 chicks have been born in the pheasantry and five natural deaths of the newly-born were reported during this period.

Ornithologists say the western tragopan, belonging to the family Phasianidae that also includes the peafowl and the red jungle fowl, is found in the northwestern Himalayan region of India and Pakistan.

In India, its habitat is at an elevation of 2,400m to 3,600m in the Kashmir region of Jammu and Kashmir and Kullu and Shimla districts of Himachal Pradesh.

It has also been reported in the Garhwal region of Uttarakhand. In the eastern Himalayas, the western tragopan is replaced by the satyr tragopan.

Wildlife experts attribute their downfall to habitat degradation, hunting and extensive grazing of the forest by livestock.

The Daranghati Wildlife Sanctuary, located in the proximity to the Sarahan breeding centre, and the Great Himalayan National Park in Kullu district, are the potential western tragopan habitats.

"Our preliminary estimation in the Daranghati sanctuary indicates that it holds a good population of the western tragopan. We even have the reported presence of the Himalayan serrow (goat-antelope), a near threatened species, and the musk deer during surveys carried out by the Sarahan wildlife division," Narasimha said.

In 2010, western tragopan conservation efforts suffered a big setback with three adult birds dying within a month in the Sarahan pheasantry. Post-mortem findings confirmed E. coli bacteria as the cause of death. The infection had severely affected the organs of the nine surviving pairs, including the reproductive system.

After a gap of two years, all the surviving pairs multiplied and seven chicks were born in 2012.

Jennifer R.B. Miller, who surveyed the Great Himalayan National Park in April-May 2008 during a US Fulbright Student Research Scholarship, said the population of three pheasant species -- western tragopan, koklas and Himalayan monal -- in the park have grown since surveyed in the late 1990s.

"The relative abundance of all three pheasant species was significantly higher (in 2008) than in previous surveys," said Miller in her paper titled 'Himalayan pheasants in the Great Himalayan National Park' published in the Indian Birds journal in 2010.

For estimating the population of the western tragopan, as with other pheasant species, specialised techniques are needed. One of the standard census techniques is recording its call counts at a specified times and locations.

From March-end till mid-June, the male tragopan gives a loud chorus before dawn during the breeding season. In the estimation, every male call is counted, which gives an index of the population in a specified area.

"We have western tragopans living for up to 14 years in captivity. We know that breeding is slow at this stage, but all the signs are that within five-six years we will be breeding large numbers of birds each year," Narasimha said.

As for the inbreeding problems being faced by other captive species in India, Narasimha said: "All tragopans are ringed and micro-chipped on arrival and at the time of birth at the centre. A key requirement is to have an adequate founder population so that there is a sufficient genetic resource to manage this issue."

"We are maintaining a studbook, a definitive record of each bird, any pairing, breeding attempts, and offspring so that we can carefully manage the birds and avoid close relatives from being put together in future. This is a part of our genetic management," he explained.

Narasimha is quite confident about the survival of the western tragopans in nature after being bred in captivity. "There will be pre-release phases to ensure the birds smoothly transit from captivity to the wild."

Like the highly-endangered cheer pheasant birds, which are also being bred in captivity in the state, the wildlife wing plans to also release the western tragopan captive-bred birds into the wild.