Mahabalipuram is a small shore-village in Tamil Nadu. Built during the Pallava dynastythis place is an architectural delight. The shore temple along with the rock-cut sculptures creates a unique blend of history and natural beauty. It is a complex of elegant shrines that depicts the zenith of Dravidian art and architecture. 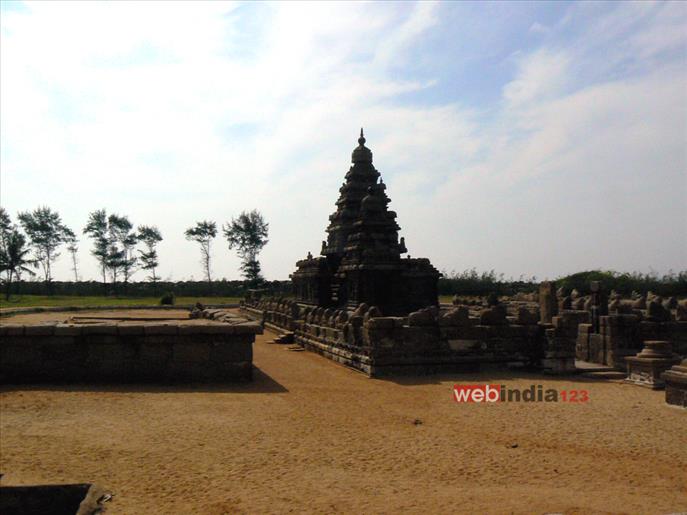 The temple perched on top of a rocky outcrop, sits like a crown atop of the Bay of Bengal. Its design is very unique and it catches the first rays of the sun at daybreak and the water seems to be illuminated towards the end of the day. No wonder Percy Brown described this breath taking scenery as a landmark by day and a beacon by night. The shore temple standing against a picturesque azure sky and the vast blue sea is truly a breath taking sight.

The temple was built during the rule of Rajasimha, a Pallava king during the 7th and 8th century. It is unique in construction as it is built entirely out of stones whereas the temples of that period were generally built from rocks. This temple is a 5-storied Hindu structural temple unlike any other monolithical structures in Mahabalipuram, having a 60feet high pyramidal structure sitting on top of a 50feet square platform. A small temple, which originally served as the porch sits in front of the main temple. The entire temple complex has been built out of finely cut locally available granite.

The most innovative design element of the entire temple is the Shikhara or spine of the temple that is built in a soaring, tiered style tapering towards the top and is totally different from the usual dome structures found in most Hindu structures. All the elements of Dravidian architecture like the Shikhara, Vimaana, Gopuram and the carvings of animals can be found here at the shore temple. 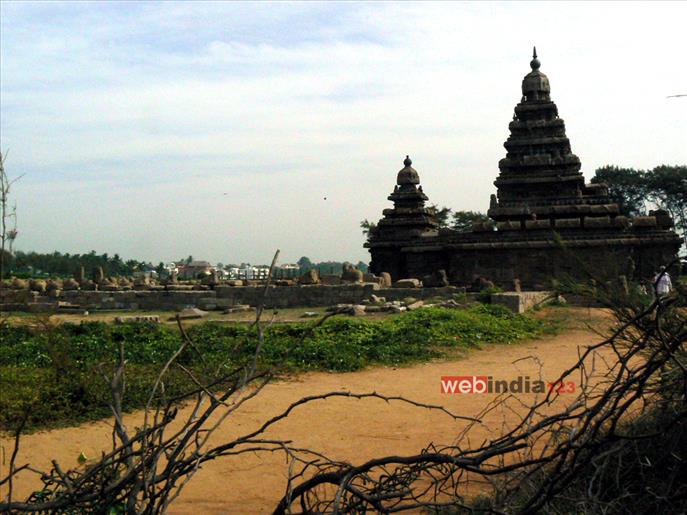 The main shrine of the temple is sea facing towards east. Relics of both Lord Vishnu and Lord Shiva can still be found here. Inter-connected water channels lets in the sea to the temple, making it a water shrine.

It is an uncluttered structure with 2 shrines dedicated to Lord Shiva, facing the east and west respectively. In between these 2 shrines is a 3rd shrine that honors Lord Vishnu, reclining on the serpent Sesha. Lord Vishnu is believed to be the protector of the universe. The entire temple complex is covered with breathtakingly real and artistic sculptures.

The Mahabalipuram shore temple, which has now become a UNESCO world heritage site, is opined to have been constructed, as a work of art rather than a place of worship. A major portion of the temple has been corroded by winds and seawater and some parts of it were greatly damaged when tsunami struck here in 2004. However recently a stonewall has been added to protect the temple structure from being corroded further by the seawater.