As Cyclone Vardah has made an appearance and made a landfall in Tamil Nadu and Andhra Pradesh, here's a list of previous cyclones that have struck India and made an impact from 2010. The list is not comprehensive.

There is an annual cycle of tropical cyclone formation in the Northern Indian Ocean, resulting in 3-4 cyclonic storms in a year. Although there is no official set record, cyclones tend to form between April and December, with the peak from May to November. The two main seas in the North Indian Ocean is the Arabian sea (ARB) to the west of Indian subcontinent, and the Bay of Bengal (BOB) to the east. Indian Meteorological Department (IMD) is the official regional specialised center and Joint Typhoon Warning centre (JTWC) is the organisation which releases unofficial advisories. 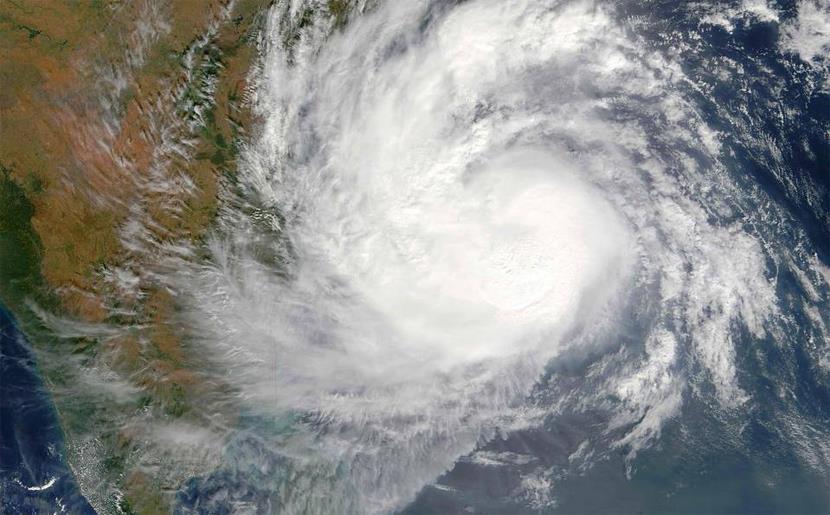 Cyclone Laila: In 2010, after a gap of two decades the south-eastern part of India was hit by two 'severe' cyclones within a gap a few months; The first being Cyclone Laila which entered along the coast of the Bay of Bengal. Total deaths in Sri Lanka, Andhra Pradesh and Tamil Nadu amounting to 65 and cost of damage reached a total of USD 117.49 million. Fishermen, who set out in about a 100 boats, were lost at sea, according to fisheries department sources.

Cyclone Jal: Following Cyclone Laila, Cyclone Jal formed in the Pacific Ocean on 31st October 2010. Torrential rains poured in Thailand causing extensive flooding which led to the demise of 59 people and similarly claimed four more lives in Malaysia. Subsequently, Jal proceeded towards Andhra Pradesh where, through timely warnings. 70,000 people were evacuated from villages where damage was expected to be the highest. On 9th November, the C.M. of the state declared 54 people dead due to the storm. The Centre then promised twenty kilograms of rice and five litres of kerosene to each family in flood-affected areas with Rs. 2 lakhs also to be given as compensation to the families of the victims. The total damage estimated by the Indian government was USD 53.55 million with Visakhapatnam district suffering a damage of USD 18.53 million, Nellore district suffering a damage of USD 22.59 million and Prakasam district suffering a damage of USD 12.43 million.

Cyclone Nilam: The next deadliest after Cyclone Jal, Nilam originated from a low pressure area in Bay of Bengal on October 2012. It intensified from a depression to a cyclonic storm and made a landfall near Mahabalipuram in Tamil Nadu. Heavy rainfall and ensuing floods in Andhra Pradesh, Tamil Nadu and Srilanka caused severe damage to property and 75 deaths in total.

Cyclone Phailin: Originating and named in Vietnam, Cyclone Phailin was a cyclone of matched magnitude to hit the peninsula in October 2013. The cyclone hit Andhra Pradesh and resulted in the evacuation of 64,000 people from low-lying areas. A total of 134,426 people were eventually evacuated. Power and communication lines went down across the district. With one casualty, the damage amounted to USD 8.1 million in Andhra Pradesh alone. Other affected states like Odisha, Jharkhand and neighbouring states recorded losses upto USD 688 million. Odisha recorded the casualties to be 44 people dying due to storm related accidents.

Cyclone Helen: Cyclone Helen originated in the Bay of Bengal near Andaman islands on November 2013, and made a landfall south of Machilipatnam in Andhra Pradesh. Heavy rainfall causing heavy damage to harvest crops was  reported. More than 11,000 people were evacuated from the areas affected by the storm, and a total of 10 deaths have been reported in incidents related to the cyclone.

Cyclone Lehar: Around the same time in the same year (Nov 2016), another storm Lehar, which originated as low pressure in South China sea formed a depression in the Bay of Bengal, affected Andaman and Nicobar islands and Andhra Pradesh. Extensive preparation was done in the wake of the storm by the authorities of the coastal districts of Andhra Pradesh and Odisha, including the evacuation of 45,000 people in low-lying areas. But only minimal damage were reported and there were no fatalities.

Cyclone Hudhud: The last time a cyclone of Vardah's scale breached from the Bay of Bengal was in October 2014 when Cyclone Hudhud originated from a low-pressure system in the Andaman sea in May 2014, and snowballed into a category IV cyclone, being dubbed as 'Extremely Severe.' It proceeded to hit the Indian states of Andhra Pradesh mainly Vishakapatnam, Chattisgarh, Madhya Pradesh, Odisha. Heavy rains and floods resulting from the cyclone caused estimated damages of approximately Rs 21,000-crore / USD 3.4 billion. Death toll due to the cyclone hit 124. Unlike most Bay of Bengal storms that dissipate quickly over land, Hudhud has been the only tropical cyclone whose remnant ever reached as far north as the Himalayas. The cyclone further proceeded up north to trigger an avalanche in Nepal. Prime Minister Modi announced of October 15th that Rs 1000-crore / USD 136 million was to be awarded as aid for affected areas.

Cyclone Gujarat / ARB 02: Following a series of monsoon disturbances, a fresh wave of thunderstorms organized into an area of low pressure on June 21, 2015 in the Arabian Sea, off the coast of Gujarat. Also known as deep depression 'ARB 02', the Gujarat cyclone resulted in severe floods in Gujarat. Torrential rains battered Gujarat, with peak accumulations of 636 mm (25.0 in) in Bagasara, 511 mm (20.1 in) in Dhari, and 400 mm (16 in) in Variyav, isolating many villages. The flood claimed about 80 lives and left many injured, with Saurashtra suffering the greatest losses. Apart from loss of human life, the cyclone also led to the destruction of crops, death of cattle and damage to the Gir forest. The carcass of about 20 Asiatic lions were recovered from the forest. 4,000 people were evacuated from various villages and around 200 from the flood-affected areas. A compensation of Rs three billion was announced after seeing the loss of human life and infrastructure.

Cyclone Roanu: The cyclone 'Roanu' originated from the south of Sri Lanka, which then intensified into a cyclonic storm as it accelerated its way to the coast of Bangladesh, in May 2016. The cyclone resulted in around 200 deaths in Sri Lanka and Bangladesh and heavy rainfall in Tamil Nadu, Andhra Pradesh, Kerala and Odisha. Reports revealed that Chennai had received the highest rainfall over two decades due to the cyclone. About 12,000 rescue officials were deployed in the city to control the chaos.

Cyclone Kyant: The cyclone 'Kyant' made its way to India from the east-central Bay of Bengal, late in October 2016. Although the cyclone did not make an impacted landfall, it resulted in strong winds over Odisha and AP coast. It also resulted in moderate rainfall in AP and TN. The sea continued to be rough for a few days, with fishermen advised not to venture in. People in TN and AP saw a wet Diwali due to continuous downpour for many days.

Cyclone Nada: More recently, Cyclone Nada originated in the form of depression in the Bay of Bengal, appeared to threaten the peninsula in late November 2016. However, as the states geared up, the cyclone seemed to fizzle out with its landfall in Tamil Nadu. There was light to moderate rainfall in Tamil Nadu and Kerala, with fishermen advised not to venture out into the sea because of the rough sea. Heavy winds were encountered. Schools were shut for two days in TN to act as storm shelters for the citizens. Unfortunately, 12 deaths were still recorded related to the storm.

Cyclone Vardah: Turning from 'very severe' to 'severe', Cyclone Vardah has breached Tamil Nadu and Andhra Pradesh. With its landfall in December 2016 off the coast of Chennai, the cyclone is currently at category 1 strength and is expected to weaken with sustained winds of 80 to 90 kmph. Thousands have been evacuated in Tamil Nadu, Puducherry and Andhra Pradesh. Schools have been closed and India's labour department has issued an advisory, requesting companies to allow employees to work from their homes. Fishermen too, have been advised to stay away from waters. In addition, the agricultural sector has been hit severely with widespread destruction of banana plantations, papaya groves and rice paddies. The cyclone had already left 1500 people stranded in the islands of Havelock and Neil in Andaman and Nicobar islands last week. The NDMA, Indian Navy, Indian Army and NDRF are all set to start rescue operations the moment weather conditions improve.