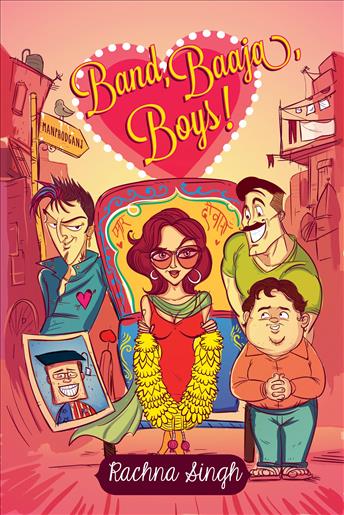 A university teacher once told me that Allahabad used to be so full of historians and lawyers that you couldn't throw a stone without hitting either of them. But even in its decline, like many other Indian cities where past glories outstrips present potential, it isn't so moribund that it can't host a tale of love's various manifestations -- calculating, aspirational, vengeful and deluded.

All this takes place in the city's Mumfordganj, named after a British administrator, who is forgotten while the pronunciation -- like many other Raj-era names scattered across our cities -- is tweaked to make it easier for Indian tongues. And it is this rendering of "Manphodgunj" -- which can also mean "heartbreak square" -- that sets the tone for Rachna Singh's uproarious near-farce -- for at least some participants.

At its centre is newly-turned-21 Binny Bajpai, who has become an alluring woman, a bit naive but well conscious of the power of a "jut of the hip, or a flutter of her eyelashes" to seek (male) attention whenever feeling neglected especially in favour of her convent-educated counterparts.

But for her parents, she is still "their innocent little China doll" and it is with them she must contend to determine her future which she wants to be comfortable and on her terms -- as far as possible.

Though she can -- and frequently does -- twist around her finger her father Brajesh, who runs a women's undergarment shop, can ascertain a customer's size in a look but is yet to comprehend women fully, her mother Kumud, the power at home, is a different matter, though a little too influenced by TV soaps -- her reason to wait for a matrimonial alliance is hillarious (later, she becomes possibly the first character in published English fiction to say "kalmuhi", "karamjali" and "kalankini").

Waiting in the wings are a clutch of suitors ranging from a computer programmer in the US, the "gorment"-job holding son of a family friend, and a besotted but not too brilliant civil service aspirant, who fancies his chances after helping her father in a ticklish dispute, while Binny falls in and out of love with the lazy son of a legislator.

As decision-time draws near, she seeks to take revenge on the latter, who dropped out of touch as his family fled when his father got embroiled in a messy sex scandal, and now wants her to come to Delhi so they can rekindle their relationship.

However, he has picked some new tastes which are not very benign, and Binny, who has convinced her family to let her travel on the pretext of helping a friend, may be walking into danger.

What will happen to her, and what will be her eventual choice is the crux of this entertaining romp through non-metropolitan, "mofussil" India most of us have come from and not yet forgotten -- and it is this sizable segment that will most relish it.

Rachna Singh, who herself lived once near Mumfordganj (named not after Sir Mumford, but C.A. Mumford, Chairman of the Allahabad Municipal Board in the early years of the 20th century), has not only crafted a quirky story of love and matrimony in her fifth book, but paid tribute to memories of life in such a setting with wit, wicked and all-encompassing, but tenderness and insight too.

This is not only evident in the story of Binny's family, but her education, life in colleges and hostels, the dialect, slang ("bhak" itself will evoke a flood of memories from those from certain parts of Uttar Pradesh) and speech cadence (Binny's "Day-dee" and "Marriz... marriz... why human beens need to do a marriz?" and Raja Singh "phrom District Banda").

The story is also tribute to a declining Allahabad, which, however, is yet to become another anodyne and anonymous big city, as it still sees tradition and modernity co-exist (though uncomfortably), where bad English is no bar to expression, lack of opportunities do not always stifle aspirations, and life is rarely dull -- though for the wrong reasons.

But above all, it presents a feisty and determined heroine, too good to be restricted to a single outing, and hopefully returning soon in new adventures.