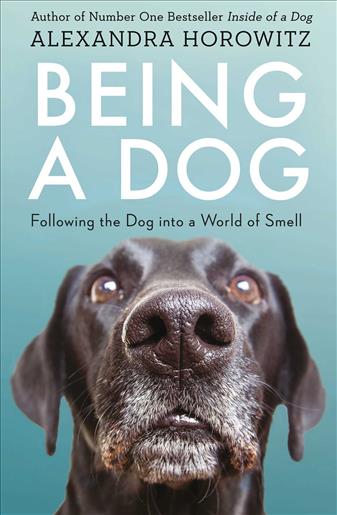 Remember the cold, soft nose nuzzling you when you get back home and pet your dog, who, after the series of joyous yelps and vigorous tail-wagging, seems most keen to smell you closely. Are our canine companions making a gesture of affection, expectation, or is it something far more complicated?

Or take the way that the dogs dawdle when you take them out for doing their stuff, look for specific places and pay extraordinary attention to the waste of their co-species, as some of the more impatient dog-owners will attest.

Revealing the mystery behind these "dogged habits" or patterns of canine behaviour in this book is Alexandra Horowitz, who tells us it is the dog's way of gaining knowledge of the surroundings -- and full knowledge, through the powerful and unerring sensor that is their nose.

"To a dog, there is no such thing as Âfresh air'. Every breath is full of information. Dogs can identify drugs of every type, cancer, land mines, termites, they know about the upcoming weather, earthquakes before they happen, how Âafternoon' smells, what you had for breakfast, and whether a cat touched your leg yesterday," she says.

Horowitz, who had earlier written "Inside of a Dog: What Dogs See, Smell and Know" (2012), expands, in her third book, on the olfactory component to show how it is dogs' most powerful and primary sensory resource, how it works and is capable of and what it can teach us.

A teacher of psychology, animal behaviour and canine cognition at Barnard College, Columbia University, she confesses to being "besotted with dogs" but notes that "to know a dog it is to be interested in what it's like to be a dog. And that all begins with the nose".

Beginning by describing the noses of her own two dogs, Horowitz admits that before she became a research scientist, she had never thought about this particular appendage, but notes that "this oversight isn't restricted to dog noses. We rarely study the nose on each other's face".

And neglecting this particular sense, except when it is enticing or unbearable, is unfortunate because the information "about the world based on smell is unthinkably rich" and is now the preserve of the dog and other animals since "we humans, who once knew about it, once acted on, but have since neglected" it.

Horowitz seeks to explore here what dogs smell on the owners, on the ground, or other dogs, what can they know about the owner which they might not realise themselves, and what it is like to "smell the world with that amazing nose".

This she tells us by having "tracked the tracking dogs", researching the dog's experience of themselves, other dogs and smells of the human world, and interacting with scientists researching the topic (including one who has adapted fluid dynamics to the study of noses and smell) as well as dog handlers and trainers.

This is supplemented through evocative accounts of visits to a centre training scent dogs, expeditions with people training dogs to sniff truffles and those utilising them to monitor wildlife populations, as well as hunt missing dogs.

And in the process, we learn facts like how dogs, depending on the breed, have 200 hundred million to a billion nasal receptor cells, far more than humans' six million, as well as more kinds of receptors -- over 800 (in humans, the "eye, conveyer of the brilliance of a sunset dancing off the clouds after a thunderstorm, uses just three receptors to draw this colourful scene in our heads") and much more.

But Horowitz doesn't confine herself to only dogs where smell is concerned, giving due emphasis to our own self-dissipated capabilities. One of her most entertaining field trips is an expedition (with a class) to ascertain city smells in New York City with the aim of bettering an experience of the city through smell as well as other senses, as well as exploring the sector of human scent professionals like perfumiers and wine tasters.

An entertaining and informative romp through the wonders of nature, Horowitz also makes it more universally relevant with her eloquent appeal not to neglect our own natural capabilities due to technological advancements.
TAGS: Being A Dog,   Alexandra Horowit,