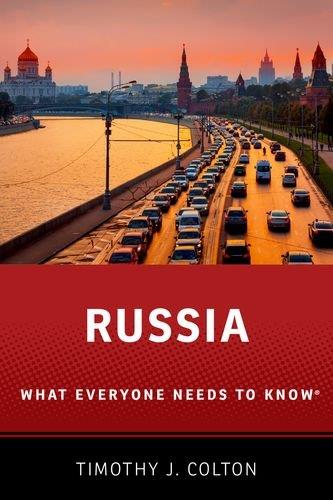 Winston Churchill, who once memorably described Russia "a riddle, wrapped in a mystery, inside an enigma", was not the first to express puzzlement at the country's dynamics, motivations and intentions. For centuries, these questions were raised -- and are still being asked -- as Russia, after a spell of weakness and partnership, again seeks to regain its role in regional and global affairs.

It may be debatable if Russia's actions or contrary stance to some international policies of the US and its allies are good or bad, or if it is on the right path under Vladimir Putin's rule, but it is important to know what and how its people -- and political leaders -- think, what they want, if, and how, is Putin's Russia different from that of Boris Yeltsin, or the erstwhile Soviet Union, or even Tsarist Russia, and what does the future hold for it?

And then, is concentrating on Russia of any worth at all?

Seeking to provide some answers to these and other questions is Russia expert Timothy J. Colton in this book, one of the latest in the series dealing with key global issues, including climate change, the Chinese economy and hydro-fracking, as well as key countries.

But rather than through a linear narrative, these are presented in the series in an accessible format as a spread of questions and answers grouped thematically.

In this case, Colton, the Morris and Anna Feldberg Professor of Government and Russian Studies at Harvard University and author of several books on Russia, including a recent biography of Yeltsin, frames (and answers) some five-dozen questions under six heads including "Why the Russian Phoenix Matters", "Foundations" and "A New Russia".

After introducing Russia and the Russians and why Soviet Russia was a headache for the West, he asks "If it is worth paying attention to a downsized post-Soviet Russia?"

The answer, Colton argues, lies in its expanse and proximity to key areas, economic power, military strength -- including a potent nuclear arsenal and ability to project power (as in Syria) -- ability to withstand the Western powers, scientific and technical prowess, and its "disruptive potential" of which the Crimea annexation and eastern Ukraine are the latest examples.

He also touches on Russia's "inscrutability" (to outsiders), and shows how it had a long pedigree before -- and after Â Churchill's remark in a radio broadcast during the first few weeks of the Second World War.

And while history and geography affect all countries, the extent seems greater in Russia, and Coltan deals with this extensively, while also explaining how it grew so huge, why it remained impervious to the current of democratisation that swept across other European nations since the Age of Enlightenment and why Tsarist rule ended in a revolution and not reform.

On Russia during the 20th century, he deals with all the phases of communism, if the Soviet economic model had anything at all to commend it, how and why Mikhail Gorbachev's attempts at reform failed and Yeltsin upstaged him. He then takes up the challenges, achievements and failures of Yeltsin, including an incisive look at the notorious oligarchs and their influence.

But Colton really hits his stride -- and contemporary relevance -- when he comes to the penultimate head, "Transition within the Transition", which is dominated by Putin. Here he provides a fairly balanced account of his background, rise to power, reasons for popularity, impact, his changed attitude in his second span as President, as well as questions such as if he can be blamed for killing democracy.

Equally balanced and relevant is the last part where the author seeks to explain the reasons for Crimean episode, the Ukrainian crisis, ascertain if a new Cold War is underway, seek to predict the future of Putin (some very feasible courses of action are made out), sum up Russia's prospects and its way ahead -- and if it is really a prisoner of its history.

With reasons for Russia's significance already laid out, this book offers a insightful look at how place and past shape a nation and how one man -- at the right time and place and with the right moves -- can change its course.