The maverick outsider Donald Trump stunned the world by winning the US Presidency, the most powerful global job, as voters revolted against a smug, condescending establishment, rejecting Hillary Clinton - seen as the face of the status quo. 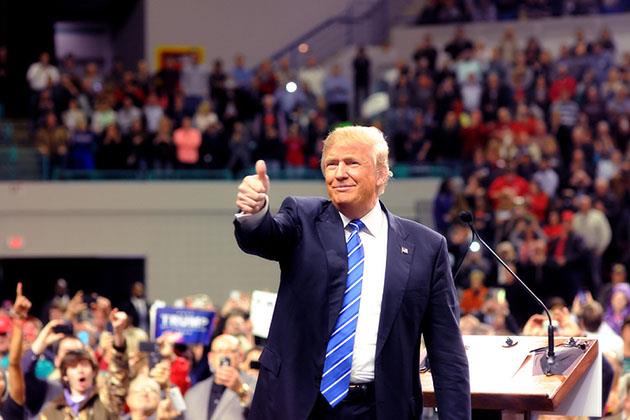 His victory plunged the nation and the world into an abyss of uncertainty. He quickly tried to bring calm with a radical makeover of his style, ditching his brash style for a Presidential demeanour.

At his victory rally Wednesday morning, Trump called for national reconciliation, saying: "It is time for us to come together as one united people."

He offered his "pledge to every citizen of the country" to work for them and said he would seek from those who were critical of him their "guidance and help so we can unify our country".

Trump spoke of Clinton's hard work in her campaign and declared she was owed "a major debt of gratitude for her service to the nation".

"The forgotten men and women of our country will no longer be forgotten," he said to his voter base, which he described as a movement, not a campaign.

"No dream is too big," he said. "America will settle for nothing less than the best."

His message to the world was that while for him the US came first, "We will seek common ground, not hostility."

Earlier, Clinton phoned Trump to congratulate him and concede the Presidency to him.

Clinton had shut down her celebratory meeting here at 2 a.m. without making an appearance at the event where thousands of her supporters fell into a sombre mood.

Her campaign chief John Podesta came on stage at the Javits Center event and thanked the supporters and asked them to go home and get a good night's sleep because at the late hour the results weren't final.

The Republican Party also performed well in Congress, retaining control of both Senate and House, even though the leadership has been at odds with Trump.

This would give Trump a free rein to shape his administration and policies -- if he can reconcile with the party leadership.

The entire intellectual, media, cultural and entertainment elite were ranged against him as were Wall Street and Silicon Valley leaders in addition to even many of his own party which makes his victory formidable -- and to them threatening.

Trump's style of mocking his opponents resonated with a large swathe of voters, who shared the disregard for the establishment, even if the elite held him in contempt.

The US elections were in a way a mirror of the 2014 Indian election, where Prime Minister Narendra Modi confounded pollsters and pundits by defeating a political dynasty.

And more recently, the British voters pulled off a similar coup with Brexit that passed against all prognostications.

This was the second time Clinton was robbed of her chance to make history as the first woman elected President of the US.

In 2008, President Barack Obama staged a coup derailing her all but assured claim to the Democratic Party nomination. This year, she made it past the primary but lost to Trump in an upset.

Indian Americans overwhelmingly support the Democratic Party and Trump made overtures to the community, even if it was focused on Hindus.

He addressed a rally of Hindus, assuring them that they would have a friend in the White House and that he would come down hard on terrorism.

Polls showed that about 65 per cent of Indian Americans supported Clinton while only 7 per cent were for Trump.

Trump, a real estate developer and reality TV character with no previous political or government experience, ran on a platform of radical economic changes, of bringing jobs back to the US and reneging on trade deals.

But he has yet to outline clear plans or have a line-up of people to help him implement the promises.

The stock markets around the world went into a swoon over the uncertainty, with the Dow Jones futures dropping nearly five per cent.

Trump has also said that he would dismantle the health insurance open to the uninsured introduced by President Barack Obama.

Another area of uncertainty is the nomination of judges to the Supreme Court, which has the potential to radically change the laws, society and politics of the nation.

During the campaign, his policies on immigration and terrorism and statements about Muslims were exaggerated by the media and the political opposition to an extent that they backfired.

While he said that rapists and criminals were coming over the border and needed to be stopped, it morphed in the media and political message to him saying that all immigrants were criminals - and by extension at first Mexicans and then all immigrants.

And his call for enforcing immigration laws on the books and extending the walls and barriers now in place along the border with a wall across the entire border was turned into a campaign of xenophobia and hate against non-whites.

His call for temporary suspension of immigration by Muslims while the screening process was being reviewed was turned into him wanting to deport all Muslims.

The Clinton campaign pursued a policy of appealing to smaller segments of the nation, tailoring messages to appeal to them. In the process, they contributed to fracturing of the nation and creating a climate of fear.

This in turn turned everyone else into enemies. This forgotten middle, the non-racist working class and whites bearing the brunt of globalisation and economic disruption, far larger than what the Democrats may have thought and which included women, turned against Clinton.

She spoke and acted as if the Presidency was hers by right, further alienating many people.
TAGS: Trump,   US president,   US elections,   US poll,