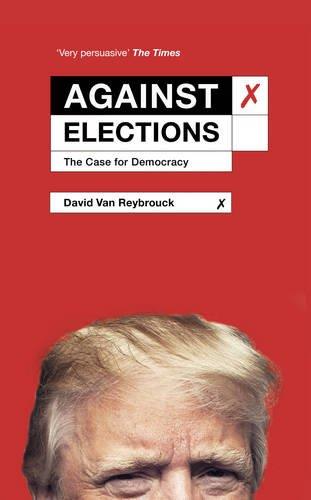 Democracies, at a time when they predominate both across the globe and as an aspiration, are paradoxically facing a crisis too. Were we to find, across various democratic nations, how much faith people have in their elected representatives, political parties, and legislatures, the responses are likely to be quite same - and not very flattering to any of these prominent institutions. What accounts for this?

Surprisingly, the reason lies in the prevalence of democracy's indispensable tool - elections, in consonance with some social and economic changes in the last few decades, especially during the 1980s, contends Belgian author and thinker David Van Reybrouck, who cogently and persuasively sets out his case and offers some remedies.

Citing a recent World Values Survey, based on 73,000 people in 57 countries , he says 91.6 per cent of the respondents said they believed that democracy was a good way of governing a country. However, it also "showed that worldwide over the past ten years, there has been a considerable increase in calls for a strong leader 'who does not have to bother with Parliament or elections', and that trust in parliaments, governments and political parties has reached a historical low".

"It would appear," says Van Reybrouck, "that people like the idea of democracy but not the reality of it, or at any rate the current reality". He ascribes this in part to the experience of new democracies, particularly those in the former Soviet bloc, and recently in the Middle East for the disappointment when they find out "that in practice democracy is less than an ideal system, especially when democratisation is accompanied by violence, corruption and economic decline".

However, democracy is the best bet, he says, for it strikes an optimum balance between the two key requirements of any political dispensation - efficiency and legitimacy - but there are many issues affecting it, manifested in low turnouts in elections, ennui with the political process and declining membership of parties.

And Van Reybrouck approaches his examination most clinically with this slim volume divided into four main parts - "Symptoms", "Diagnoses", "Pathogenesis" and "Remedies".

His description of the symptoms is hard-hitting, and though his frame of reference is mostly Western Europe, some will have a global resonance and most others will strike also a chord anywhere.

It is inarguable that in the "twenty-first century, sovereignty, one of the basis of the nation state, has become a relative concept", which also implies that the "great challenges of our day - climate change, banking crises, the euro crises, the economic crises, offshore fraud, migration, overpopulation - can no longer be dealt with adequately by national governments".

But more startling, but true, is his argument, well supported by examples, how, politics, which has been the art of the possible, has now "become the art of the microscopic" with the "inability to address structural problems is accompanied by the overexposure of the trivial, fuelled by insane media that, true to market logic, have come to regard the exaggeration of futile conflicts as more important than any attempt to offer insight into real problems..."

And in this, "democracy has become comparatively toothless but at the same time noisier".

How it got that way, and what role are played by elections - which Van Reybrouck tells us have been only been accompanying democracy, which is millenia-old, for just about the last two centuries, are dealt with his eye-opening book. His argument on what elections, which date from the American Revolution (1776) and the French Revolution (1789), were actually designed to achieve is most startling - but if you consider the existence of a professional political class, you will realise he has a point.

Is there a way out? Yes, he says and takes us back to the birthplace of democracy, not matter how imperfect, in Athens to show what we can consider. And it wasn't thousands of years ago only, variants persisted in some prominent cities of Europe like Venice and Florence down to the modern era and even some attempts at replicating it are being made in the modern world.

In his provocative but well-argued thesis, India is not mentioned but it is not difficult to imagine how some problems seem of our country only - and act.

(Vikas Datta can be contacted at vikas.d@ians.in