In a book that will be invaluable to any scholar or journalist trying to make sense of what is happening in Kashmir today, Sandeep Bamzai's 'Gilded Cage' offers a riveting account, drawing from previously unaccessed private papers, of what transpired in the Valley between the sunset years of the British Raj and the events leading up to the dismissal and imprisonment of Sheikh Mohammad Abdullah on August 8, 1953. 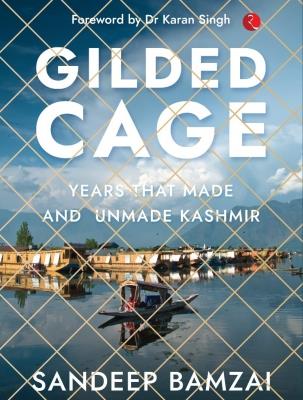 Racily written and packed with new details, the book, which is the third part of the author's Kashmir Trilogy, gives details of:

-- how the Kashmiri nationalist leader convinced Pandit Jawaharlal Nehru to initiate military action against the Pakistani tribal raiders infiltrating into the Valley to annex it;

-- and eventually, how the Sheikh boxed himself into his exclusivist vision of an independent Kashmir minus Jammu, completely at odds with Nehru's expansive Idea of India, leading to Bakshi Ghulam Mohammad, the Sheikh's deputy and Nehru's eyes and ears in Kashmir, displacing him as leader of the National Conference.

As he fleshes out this dramatic story of the 'Years The Made and Unmade Kashmir', Bamzai digs deep into the hitherto unpublished papers of his grandfather, K.N. Bamzai, Delhi bureau chief of 'The Blitz', who later served as Sheikh Abdullah's private secretary and OSD to Nehru, seeing the estrangement of the two political allies -- "one of the most unfortunate happenings in the years that followed Independence" -- from a privileged position.

The papers contain a wealth of information about the tense October of 1947, especially the time when the New Delhi establishment was shaken by the explosive revelation by K.N. Bamzai in 'The Blitz' that a letter from Sir George Cunningham, then Governor of NWFP, to the Indian Army's commander-in-chief, Sir Robert Lockhart, exposing the role of Pakistan state actors in the so-called tribal raids, was not shared by the latter with his political bosses.

The letter would have strengthened India's case in the United Nations and maybe altered the course of history.

K.N. Bamzai's papers also recorded how the Sheikh, obsessed as he was with his idea of Kashmir, tried to sell it to the Americans, who were by that time very much interested in Jammu and Kashmir, which they saw as the last outpost against communism in Asia. And it was the American ambassador's wife, Mrs Loy Henderson, in whom the Sheikh confided, without realising that the Bakshi was relaying all this information to Nehru.

The book -- the third after the author's 'Bonfire of Kashmiriyat: Deconstructing the Accession' (Rupa; 2006) and 'Princestan: How Nehru, Patel and Mountbatten Made India' (Rupa, 2020), which won the prestigious Kalinga Literary Award in 2020 -- is studded with such nuggets on the years that defined what the world now knows as the Kashmir Problem.

Sandeep Bamzai, having worked across all major news platforms in positions of eminence for the last 40 years, is the Editor-in-Chief and Managing Director of the Indo-Asian News Service (IANS). He began his career as a cricket writer with 'The Statesman' in Kolkata. The past two decades have seen him on the news frontline as executive editor at TV Today, editor at 'Mail Today', and editor-in-chief and COO at 'Financial Chronicle'.

He has also worked at 'The Indian Express', 'The Illustrated Weekly of India', 'Business India' and 'Hindustan Times' -- a life Bamzai describes as a "fulfilling journey". An alumnus of the prestigious St Columba's School, New Delhi, he graduated in economics from the University of Calcutta. Bamzai, who loves the space where politics and economics converge, is also the author of 'Guts and Glory: The Bombay Cricket Story'.