Sania played her first international tournament in 1999 when she represented India at the World Junior Championship at Jakarta. Mirza's big boost came in 2002 when Paes decided to take her as his mixed doubles partner at the Asian Games. The duo went on to claim the bronze medal. The rise has been steady since then. In 2003, Sania at 16years did India proud by becoming the youngest and first ever Indian to figure in the main draw of the girls' doubles junior Wimbledon tennis championship and winning the Grand Slam title. Sania partnered 13-year-old Russian Alisa Kleybanova and defeated Katerina Bohmova of the Czech Republic and Michaela Krajicek of the Netherlands 3-6, 6-2, 6-3. It was after a long haul of 51 years that an Indian girl figured again in the final of a Grand Slam, the last being Rita Dabur, who had finished runner-up in the singles event in 1952.

A winner of 21 International Tennis Federation (ITF) titles, Sania won over  Petra Mandula of Hungary defeating her 6-2, 6-1 in the second round of the women's singles at the Australian Open grand slam. With this victory, she has become the first Indian woman to reach the third round of a Grand Slam event. Sania Mirza outlasted the Ukraine's Alonya Bondarenko to win the Open WTA tour event in her native town Hyderabad  and became the youngest and first Indian woman to win a WTA Tour title.

This 18-year-old girl became the brand ambassador of Lotto Sports Italia and the company said that it would soon launch a signature line series. With its launch, Sania would become only the fourth player after Andre Agassi of USA, Germany's Steffi Graf and Stephen Edberg of Sweden to have a signature line of her own.

She is the highest ranked female tennis player ever from India, with a career high ranking of 27 in singles and 18 in doubles. Mirza's powerful forehand strokes, confidence and positive attitude combined with good looks and charm have floored Indians and attracted sponsors in hordes. 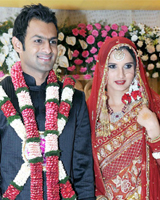 On the personal front, Sania likes dancing and listening to Rap, hip-hop and Hindi remix, likes cricket and swimming. She is very religious and never misses her daily prayers and Quran reading. She is now living with her parents and her little sister Anum in the posh suburbs of Jubily Hills, Hyderabad. Mirza, who idolises German tennis great Steffi Graf, has dreams of being the Wimbledon singles champion one day.