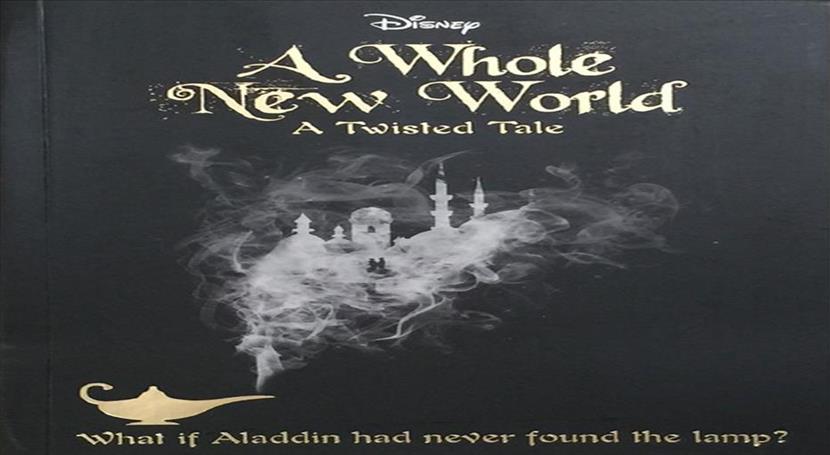 A youth in "China" (actually medieval Middle East) is convinced by a magician, claiming to be a long-lost uncle, to bring out a lamp from an underground cavern, but is left trapped when he refused to hand it over before he is out. With the magical artifact's help, he frees himself, becomes rich, marries the princess and defeats the magician. But what if Aladdin never has the lamp?

In the first of a series re-imagining classic fairy tales in new, unexpected ways, even with a bow to contemporary events like the Arab Spring, Liz Braswell presents a darker, more grittier, almost dystopian take on the familiar Arabian Nights story -- or its version we know from the 1992 Disney film. 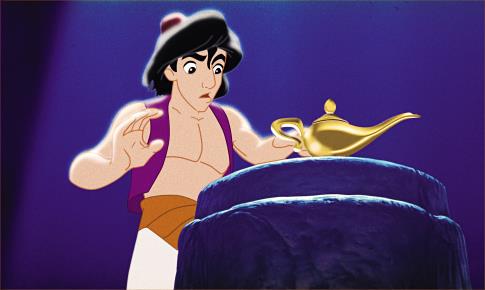 The point of departure is a crucial twist at one key moment. In this case, it is the scheming Grand Vizier Jafar, who gets the lamp, and controls the Genie.

Till this point, roughly spanning a quarter of the book, the narrative, which has been closely following the plot of the film in presenting Aladdin as an urchin living by his wits, Jasmine as an independent-minded princess, their meeting and blossoming of a romance, takes a new, darker hue.

Summoning the Genie, Jafar uses his first two wishes to become Sultan over Agrabah -- cementing his position with an act of most gratuitous cruelty -- and the most powerful sorcerer in the world, but can't obtain his third wish of getting Jasmine to love him as the Genie says this is not possible (other no-nos are killing someone or bringing back the dead).

Jafar first focuses on buying people over with gifts of food and money, but soon becomes more tyrannical, while perfecting his powers to break the laws of magic and have both love and death serve his increasingly-deranged will.

Aladdin, who has managed to escape from the cave and return to Agrabah, is shocked to see what is happening. Teaming up with the deposed Princess Jasmine, his childhood friends of the "Street Rats", including the enterprising "Queen of Thieves" Morgiana, the silent Duban and arson specialist Pareesa, they take on the power-mad and increasingly violent ruler.

But their wits are no match for his magic -- especially the dark arts Jafar has perfected.

The unlikely gang of rebels strive to unite the people against the despot, obtaining help from unexpected quarters including the merchant community and defecting soldiers, but can they fight the unholy mercenaries Jafar has employed? And as the rebellion begins to take a toll on their own lives and those closest to them, can they go on?

And then what will Jafar's third wish be?

Braswell's version of the Aladdin story is a tribute to the old stories' capability to be timeless and flexible enough to serve as a mirror, by accommodating notable features of the times they are told -- even the Arab Spring.

The penury, deprivation and divisions in Agrabah -- where grand palaces co-exist with squalid slums, children are forced to steal or scrounge to survive, dignity is in short supply, rulers are either oblivious of their people's lives and problems or power-hungry and violent -- leaves revolt as the only option. The shocking final scene will strike a familiar chord among those familiar with fairly recent happenings in the Middle East.

And does the story remain a story or become an allegory? Well, the Aladdin story is now primarily known from the Disney movie version, which itself was based on the 1940 British film "The Thief of Baghdad", which brought in the thieving element, and made the evil magician and the grand vizier one character (Jafar the Barmecide, the capable vizier of Caliph, Haround Al-Rashid, executed capriciously and demonised for eternity).

Then the Arabian Nights stories have themselves been retold from everyone from Robert Louis Stevenson to Naguib Mahfouz to Hanan al-Shaykh. This version only takes this tradition further, while tempering the fantasy with some uncomfortable doses of reality.
TAGS: A Whole New World - A Twisted Tale,   Book review,   Liz Braswell,   Paragon Publishing ,